Catch all the live scores and updates of Sri Lanka vs Pakistan 2015, 3rd Test at Pallekele, Day 3.

(Will Pakistan win a series in Sri Lanka, or will the hosts have the last laugh? Catch live cricket updates of the Day 2 of Sri Lanka vs Pakistan, 3rd Test at Pallekele here)

At stumps, skipper Mathews has put his team in a commanding position. Sri Lanka have a threshold on the match and will look on to pile on ore runs on Day Four.

Jehan Mubarak is dismissed after getting off to  a good start. Dinesh Chandimal is the new batsman and he too looks set at the moment and would not want to throw his wicket away.

Angelo Mathews plays a skipper’s knock as he gets to yet another half-century. He has been in good form throughout and  he is being well supported by jehan Mubarak, who has gotten himself off to  a good start.

Angelo Mathews and Jehan Mubarak have toiled hard and now are getting some runs. Pakistan have to get a few wickets to stay alive in the game else the Sri Lankan batsmen will run away with the game.

It’s raining again at Pallekele and the players have gone off the field. There are chances that an early Tea might be taken. Mathews and Munarak are doing well at the moment.

Sri Lanka go at a slow pace as Pakistan step up their attack. Angelo Mathews holds the key for Sri Lanka from here. Pakistan will know that his wicket is going to be very crucial for them.

Tharanga throws his wicket away after getting off to a good start and it also brings to an end a blossoming partnership between him and Mathews. Yasir Shah does the job once again for Pakistan.

Tharanga and Mathews are batting sensibly at the moment. Sri Lanka have not lost any wickets since lunch but have scored at a steady pace. Yasir Shah had finally come on to bowl and will look to dismantle the batting line-up once again.

After a couple of rain interruptions, play finally resumed and Sri Lanka find themselves in a spot of bother. Mathews and Tharanga have good looked so far and will look to continue once play resumes after lunch.

Kaushal Silva is caught at first slip  off the bowling of Ehsan Adil. He did not score many runs in the first innings and fails to make an imression in the second innings as well. Lahiru Thirimanne too was dismissed soon after.

The centurion of the first innings Karunaratne is cleaned up by Rahat Ali early. Upu Tharanga is the new batsman for Sri Lanka, who was off the mark with a FIVE!

Rain has stopped play once again at Pallekele. Stay tuned for more updates.

Pakistan have been bowled out and therefore concede a lead of 63 runs. Sri Lanka will be happy with their bowling effort and will now have to bat well to set Pakistan a huge target.

Hello and welcome to CricketCountry’s coverage of Day Three of the third Test between Sri Lanka and Pakistan at Pallekele. I am Pramod Ananth, and I will bring you all the updates from the day’s play. Sarfraz Ahmed once again played a good hand to ensure that Pakistan finished Day Two at 202 for eightm still 69 runs behind Sri Lanka. Azhar Ali scored 52, but was dismissed by Nuwan Pradeep against the run of play. Pradeep and Dhammika Prasad took three wickets apiece.

Sri Lanka could only a six runs to their overnight score of 272 for eight. Yasir Shah again finished with a five-wicket haul, and made sire tjat Dimuth Karunaratne’s 130 did not bother Pakistan too much. Pakistan made a decent start to their innings but lost both the openers, Shan Masood and Ahmed Shehzad, for 13 and 21 respectively. Younis Khan was run out by Kaushal Silva after a direct throw to the non-striker’s end when Younis was looking for a quick single. Pakistan were reeling at 45 for three at the end of the first session, and did not do much better till Sarfraz turned things around with a typically counterattacking innings. 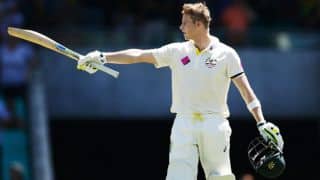 Steven Smith: England is probably one of the harder places in the world to bat against the new ball 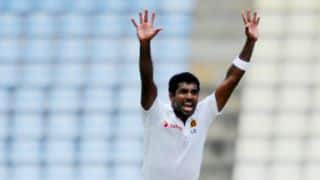