Catch the live updates of the fourth ODI at Premadasa Stadium, Colombo here.

Welcome to CricketCountry’s live blog of the fourth One-Day International (ODI) between Sri Lanka and Pakistan at the R Premadasa Stadium in Colombo on Wednesday. We will be presenting to you the live updates from the match. The match happens to be a crunch one for the Sri Lankans, who are trailing the series 1-2 after a 135-run hammering in the third ODI at the same venue, which b0re witness to an ugly fight amongst the spectators in the stands that caused the match to be temporarily stopped. Pakistan finished on 316 for four, before bowling the hosts out for a meagre 181, with Pakistan wicketkeeper batsman Safraz Ahmed receiving the ‘Player of the Match’ award for his 74-ball 77. Catch live cricket scores and updates of Sri Lanka vs Pakistan, 4th ODI at Colombo here

Ahmed Shehzad is the Man of the Match.
LIVE CRICKET SCORE PAKISTAN 257/3 | Overs 41.5: So its all over. Pakistan win the game by seven wickets and the series 3-1 with one match to go. It has been a thumping victory for them. Pakistan win a series in Sri Lanka after nine years. With this victory, they also keep their chances alive for Champions Trophy 2017. Batting: Sarfraz Ahmed 17 (23) Shoaib Malik 29(16)
LIVE CRICKET SCORE PAKISTAN 216/3 | Overs 37: OUT! Crucial wicket for Sri Lanka. Mohammad Hafeez gets out. Will there be a twist in the tale in this game? Sri Lanka sre still in the game. The experienced Shoaib Malik is at the crese now. Batting: Sarfraz Ahmed 15 (17) Shoaib Malik 10 (7) OUT: Mohammad Hafeez c Chandimal b Siriwardana 70(88)

LIVE CRICKET SCORE PAKISTAN 203/2 | Overs 34: So Pakistan are ahead with the game big time. Earlier Mohammad Hafeez has eaten up a lot of deliveries but now he is going along well. Batting: Mohammad Hafeez 64 (78) Sarfraz Ahmed 2(8)

LIVE CRICKET SCORE PAKISTAN 96/1 | Overs 15: Azhar Ali is out, after slashing a ball from outside off to the third man fielder, who pouches the catch. That over could have been a wicket maien from Malinga had he not conceded a boundary from a square drive on the last ball. Ahmed Shehzad was almost dismissed by Malinga, in another over, but the slip fielder was late in reacting to the ball coming to him, and the ball raced to the boundary behind him This also gave Shehzad his fifty. Batting: Ahmed Shehzad 53 (48), Mohammad Hafeez 7 (14)

LIVE CRICKET SCORE PAKISTAN 69/0 | Overs 10: Three belligerent fours from Ahmed Shehzad off left-arm spinner Sachith Pathirana’s over, and a six from his previous over, have allowed Pakistan to sustain the early momentum. Nuwan Pradeep pulled up midway through his second over possibly due to a hamstring trouble, and this has further pegged Sri Lanka back. Angelo Mathews had completed the over. Batting: Azhar Ali 31 (24), Ahmed Shehzad 38 (36)

LIVE CRICKET SCORE PAKISTAN 36/0 | Overs 5: Pakistan have made a rapid start to their chase, with a few strong hits from both openers Lasith Malinga leaked 14 runs from his second over, which had a cut and a pull to fine leg, for four. Suranga Lakmal also gave away two fours, in his second over, the 4th of the innings, with an edge to third man, and an on-drive, from Azhar Ali. Batting: Ahmed Shehzad 10 (16), Azhar Ali 26 (14)

LIVE CRICKET SCORE SRI LANKA 256/9 | Overs 50: Malinga smashed Anwar Ali to deep midwicket for the second six of the game, and coupled with his consecutive fours from Irfan’s two balls in the 48th over, his knock helped Sri Lanka get past 250. He was eventually out in the final over, caught by Rizwan at midwicket. Four runs came off this last over. Not Out: Suranga Lakmal 1 (3), Nuwan Pradeep 0 (2)

LIVE CRICKET SCORE SRI LANKA 243/7 | Overs 48: Lasith Malinga hit two cracking boundaries, through midwicket and extra-cover in two consecutive balls from Mohammad Irfan in the 48th over. The batsmen show urgency but boundaries are hard to come by. The new batsmen, not set, collect runs via singles an doubles. Ashan Priyanjan is the latest batsman to get out, caught by Mohammad Hafeez at extra-cover. Batting: Sachith Pathirana 14 (12), Lasith Malinga 9 (9)

LIVE CRICKET SCORE SRI LANKA 219/6 | Overs 45 BATSMEN: Sachith Pathirana 3 (2) Ashan Priyanjan 17 (26): The wickets to fall in this period have arrived due to magnificent catching. Lahiru Thirimanne was dismissed via a a hit to deep fine leg where Ahmed Shehzad took a diving catch to remove the set batsman before he could complete his century, for 90. Mohammad Rizwan took a sharp catch at extra-cover to dismiss Milinda Siriwardana for a 19-ball 11. A six has also been hit, the first of the match, by Siriwardana, off Rahat Ali, in the 43rd over. Sri Lanka are trying to maximise the score in the remaining overs.

LIVE CRICKET SCORE SRI LANKA 175/4 | Overs 38 BATSMEN: Lahiru Thirimanne 83 (115) Ashan Priyanjan 2 (8): Pakistan’s bowlers have restricted the flow of runs with tight bowling. Dinesh Chandimal has got out, fooled by a slower delivery from Mohammad Irfan; he mistimes the ball to the man positioned at deep square-leg, Yasir Shah. The slow run-rate seems to be impeding Sri Lanka’s progress.

LIVE CRICKET SCORE SRI LANKA 144/3 | Overs 31 BATSMEN: Lahiru Thirimanne 74 (101) Dinesh Chandimal 1 (1): Sri Lanka have lost the wicket of Angelo Mathews but still they are in a good position. Lahiru Thirimanne is playing a good innings. This is a must win match for Sri Lanka and they need a good total here.

LIVE CRICKET SCORE SRI LANKA 106/1 | Overs 22 BATSMEN: Tillakaratne Dilshan 50 (58), Lahiru Thirimanne 49 (72) Comprehensive start by the Sri Lankans. Although Kusal Perera was dismissed for an unfortunate duck by Mohammad Irfan after being caught by Imad Wasim, Tillakaratne Dilshan and Lahiru Thirimanne have dobne a superb job as they have put up the 100-run stand for the second wicket, with both the batsmen also scoring their respective half-centuries.

Sri Lanka have won the toss and have elected to bat first.

Sri Lanka will desperately to get their basics right ahead of the fourth game. Their bowling department looked completely out of touch in the third game, with spearhead Lasith Malinga getting hammered for 80 runs. The absence of a quality seamer has definitely hurt the Lankans. Pakistan, on the other hand, will look to go for the kill and seal the ODI series as well, after having pulled off a 2-1 victory in the three-match Test series. PREVIEW: Sri Lanka vs Pakistan, 4th ODI at Colombo

Pakistan finished strongly on 316 for four at the end of 50 overs after winning the toss and electing to bat in the third ODI. The visitors hardly faced any trouble with the bat, with a 93-run opening stand to begin with before a series of partnerships took them past 300. Sri Lanka, in reply, were done in by early dismissals, with only Lahire Thirimanne putting up any resistance whatsoever with a 67-ball 56. Controversy broke out when a few spectators caused a commotion in the stands, with rocks being thrown towards the ground before a fight broke out amongst themselves. ALSO READ: Stone pelting on Pakistan fielders halts play in 3rd ODI 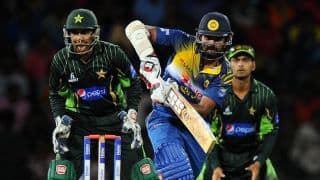