West Indies begin their chase of the 244-run target with the extra pressure of having lost a wicket early in their innings.

Hello! Ayubowan! Welcome to CricketCountry’s live coverage of Day Four of the second and final Test between Sri Lanka and West Indies at the P Sara Stadium in Colombo on Sunday. This is Amit Banerjee, and I shall be presenting to you the updates from the match on a frequent basis. The match is headed for an exciting finish between the two sides, with the result of victory slightly in favour of Sri Lanka due to their established bowling lineup that has excelled both in the pace and spin departments. West Indies will resume from their overnight score of 20 for the loss of one wicket in their chase of the 244-run target set by the hosts on the previous day. Windies have lost the wicket of Kraigg Brathwaite so far, a major dent to their hopes of drawing the series with the Lankans. LIVE CRICKET SCORECARD: Sri Lanka vs West Indies 2015, 2nd Test at Colombo (PSS), Day 4

Play will begin 15 minutes earlier than usual on the final day of the second Test in order to boost the chances of the Test coming to a result.

UPDATE: Play has been called off for Day 4 due to the incessant rain, with the umpires deciding that the field is too wet at the moment for the day to commence at any given point.

Umpires had an inspection but not looking good at all. next inspection 2.30pm #SLvWI

UPDATE: The umpires have inspected the pitch, with the likelihood of the resumption of play appearing bleak at the moment. Next inspection at 2.30 pm local time.

UPDATE: Start of play on Day 4 has been DELAYED due to rain. Let’s hope it subsides soon, as the match is headed for an exciting finish and the shower would ruin all of it!

The third day of the ongoing match saw yet even more dramatic scenes, with the balance of power see-sawing between Sri Lanka and West Indies every now and then. The hosts resumed from their overnight score of 76 for the loss of two wickets, and were off to a disastrous start in the first session by losing the wicket of both Kaushal Silva and Dinesh Chandimal. Milinda Siriwardana and Angelo Mathews thereafter seemed to have laid the platform for a massive total for their side with a 67-run fifth wicket partnership.

West Indies skipper Jason Holder’s decision to hand the ball over to part-time off-spinner Brathwaite turned out to be a master-stroke for the visitors. Brathwaite, whose only wicket in his 23-Test career so far was that of Rahul Dravid in 2011, recorded a haul of 6 for 29 to skittle the Sri Lankans out for a score of 206, just six more than their first innings total. It helped the West Indians keep the target within reach, although the loss of Brathwaite in the second session of the third day will create the extra pressure for the tourists on the penultimate day. 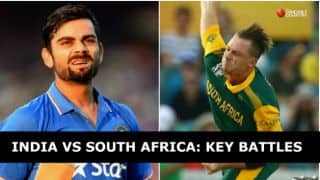