Catch live scores and updates of SRH vs RCB here.

(Will Royal Challenges Bangalore hold their nerve a pull off a win or will Sunrisers Hyderabad be dominant at home? Catch live scores and updates here)

RCB win a nail-biting match by six wickets with just one ball to spare thanks to some hard-hitting by Chris Gayle and Virat Kohli. Here’s Shiamak Unwalla’s Match Report

Praveen Kumar now. OUT! Mandeep Singh hits it straight to the man at deep square leg. Dinesh Karthik is the new batsman. DOT! Praveen bowls it outside off. TWO! Yorker and he plays it to deep square leg. SIX! Smashed over deep mid wicket. ONE! Batsmen scamper fr a quick single. ONE! Karthik plays it to long on.

Karn Sharma is into the wicket. TWO! kohli hits it to deep mid wicket. ONE! Smashed down the ground. ONE! Mandeep goes straight. TWO! Kohli top edges one and the fielder at square leg drops it. 50 up. TWO! Kohli plays it to long on. SIX over long on to finish.

Moises Henriques now. DOT! Kohli charges down the track, but misses. ONE! Kohli plays it to deep mid wicket. WIDE! Henriques bowls a short delivery over Gayle’s head. OUT! Gayle holes out to deep mid wicket. AB de Villiers is the new batsman for RCB. OUT! AB is out first ball as he hits it straight it to the long off fielder. Mandeep Singh is the new batsman. ONE! Played to point. DOT to finish.

Match has been reduced to six overs and RCB’s target is 81. Can they do it?

Rain has again stopped play. There will be a delay. Chances of the game being called off are high at the moment. Stay tuned for more updates.

Moises Henriques, David Warner smash their way to get Sunrisers Hyderabad to 135 for 3. Royal Challengers Bangalore have a mountain to climb. Here’s Shiamak Unwalla’s innings report.

Starc to bowl the final over. DOT! Yorker, Warner digs it out. ONE! Warner plays it to fine leg. ONE! Eoin Morgan gets a single. TWO! Batsmen run quickly. SIX! Morgan charges down the track and it goes over the long off fence. OUT! Morgan hits the ball in the air and easily taken.

David Wiese now. FOUR! Warner tries the switch hit, takes the outside edge. ONE! Played to deep cover. Fifty for Warner! OUT! Henriques steps down the ground, swings, takes the outside edge straight to the keeper. Eoin Morgan comes into bat. ONE! Morgan plays it to cover. ONE! Warner cuts, excellent stop by Chahal at short third man. ONE! Warner plays it down the ground.

Chahal now. SIX! reverse sweep by Warner and it’s smoked over deep square leg. TWO! Warner plays it down the ground, Kohli misfields, batsmen get a couple. DOT! Hits it back to the bowler. ONE! Hits it in the air to long off. TWO! Played to deep square leg, brings up his fifty. SIX! Henriques smashes it out of the ground.

Michell Starc now. ONE! Warner plays it to deep cover. ONE! Henriques hits it straight to the point fielder he drops. Poor stuff! FOUR! Full toss and smashed through cover. TWO! Played to deep point. ONE! Played to long on. TWO! Clipped to deep mid wicket. 100 up!

Harshal Patel is back. FOUR! Henriques smashes the ball straight to the long off fielder, but he drops a sitter. FOUR! Balls outside off and he just guides the ball to the vacant third man area. TWO! Full toss Henriques just plays it to deep mid wicket. WODE! Harshal bowls it way outside off. SIX! Henriques smokes it into the cover stand. FOUR! Henriques tries to clip it on the on side, takes an outside edge and goes to the third man fence. DOT! Run out chance and Harshal misses the stumps.

Dinda now. Bowls a no ball above waist level. Batsmen get a single as well. ONE! Henriques takes a single. DOT! Slow ball outside off, Warner misses. TWO! Bottom edge and goes past the keeper. ONE! Full toss smashed down the ground by Warner. FOUR! Henriques smashes the ball through covers again. NO BALL and that is a FREE HIT! SIX! Henriques hits the ball past the long off fielder. ONE! Played to long on.

Davide Wiese is into the attack now. FOUR! Dhawan hits it over the mid on fielder. Nicely timed. OUT! Dhawan pulls it directly to Ashoke Dinda at mid on. WIDE! Moises Henriques is the new batsman and Wiese strays down the leg side and the keeper misses, the batsmen run one. FOUR! Warner smashes the ball over mid off.  DOT! Played and missed. ONE! Warner plays i to deep cover. ONE! Henriques hits it to cover.

Harshal Patel around the wicket to Dhawan now. DOT! Dhawan comes down the track but misses completely. ONE! Dhawan cuts to deep point. ONE! Dhawan  hits a full toss to deep mid wicket. DOT! Slow ball outside off, Warner swings and misses. TWO! Warner hits the ball powerfully off the backfoot straight in the air. FOUR! Warner slaps the ball back past the bowler powerfully.

Still no signs of play starting at Hyderabad. Must be frustrating for both sets of players.

UPDATE! It is still raining at Hyderabad. Next update will be at 9.43 PM IST. Stay tuned!

Bad news! Covers back again and the the match will not start as scheduled.

The rain is back and the entire square has been covered. The 8:50 PM start is definitely out of the window #SRHvRCB pic.twitter.com/uG7KOTapHj

Match 52: UPDATE – No reduction in overs. It will be a full 20-over game #SRHvsRCB #IPL

Covers are coming off at Hyderabad, next inspection will be conducted at 8.25 PM, update at 8.50 PM.

Rains at Hyderabad has delayed the start of play.

Match 52- UPDATE: The covers are on at the moment #SRHvsRCB #IPL pic.twitter.com/wvVrm0KwbK

TOSS: SRH have won the toss and elected to bat first. RCB have called back the services of Ashoke Dinda in place of Shreenath Aravind. Dale Steyn returns to the playing XI in place of Trent Boult and Praveen Kumar is also back in the playing XI.

Hello and welcome to CricketCountry’s live coverage of Match 52 of the Indian Premier League (IPL) 2015 match between Sunrisers Hyderabad (SRH) and Royal Challengers Bangalore (RCB) at Rajiv Gandhi International Stadium in Hyderabad. This is Pramod Ananth and I will be bringing you over-by-over updates of the match. SRH vs RCB: Preview

A win for SRH will take them to second place, tied on points with Chennai Super Kings (CSK), and a win for RCB will take them to fourth place, where Mumbai Indians (MI) are sitting at the moment. RCB will once again look to Chris Gayle, AB de Villiers and skipper Virat Kohli to score runs for them and Mitchell Starc will look to impress once again with the ball. Karthik equals IPL record for wicketkeeping dismissals during RCB-SRH IPL 2015

SRH skipper David Warner will look to get his team off to a good start along with Shikhar Dhawan. There is still ambiguity whether Trent Boult is still part of the squad or has departed to England where his national team New Zealand take on England in a Test series starting from May 21. Kane Williamson however is expected to stay back as start batsman Kevin Pietersen pulled out due to a injury. It is an even contest on paper and a must-win for both teams. 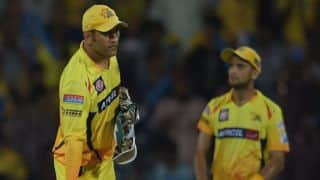 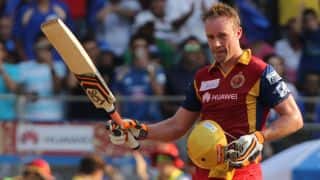