Welcome to CricketCountry’s live coverage of Round 2 of the Syed Mushtaq Ali Trophy 2015-16.

Hello and Welcome to CricketCountry’s live coverage of Round 2 of the Syed Mushtaq Ali Trophy 2015-16, as we bring you the live updates from all the games here. After the thrashing first session by Gujarat, Haryana, Saurashtra and Mumbai, here we bring you updates happening in the afternoon session (1:00 pm IST). In this session, teams include Bengal, Himachal Pradesh, Jharkand, Rajasthan, Kerala, Tripura, Delhi and many more. The matches we are covering in this session are Bengal vs Himachal Pradesh, Jharkand vs Rajasthan, Kerala vs Tripura, Delhi vs Madhya Pradesh, Odisha vs Maharashtra.

All winners gain four points. Except Kerala-Tripura match, rest all games went down to the wire.

Bengal vs Himachal: Himachal 152/3 in 20 overs | Target 155: Himachal lose by a whisker. Bengal finally won the match by just two runs which got very thrilling at the end.

Jharkhand vs Rajasthan: Jharkhand 121/2 in 19.5 overs | Target 121: Sumit Kumar and Saurabh Tiwary take Jharkhand to victory with one ball remaining. They remained not-out for38 and 61 runs respectively.

Kerala vs Tripura: Kerala 113/2 in 16.1 overs | Target 112: Sanju Samson takes Kerala to victory. He remained unbeaten on 56 hitting three fours and three sixes in his innings. They win by eight wickets

Odisha vs Maharashtra: Maharshtra 184/6 in 20 overs | Target 184: Maharashtra have done the impossible in a close game. Being two down for 11 and chasing a hefty target in excess of 180 and pulling it off on the last ball of the match is praieworthy. Bawane remained unbeaten on 52 off just 26 balls and took Odisha to victory.

Madhya Pradesh vs Delhi: Delhi 160/6 in 19.5 overs | Target 157: Delhi have won this match on the penultimate ball. It was a close match in which it was very difficult to pick the winner through a majority portion of it.

Kerala vs Tripura: Kerala 98/1 in 14.3 overs | Target 112: Kerala requires only 14 runs to win. It has been some really good cricket played by Kerala. They were awesome in the field and now their batters too have come out good. Sanju Samson is just two short off his half century. Earlier, Rohan Prem got out for 40.

Odisha vs Maharashtra: Maharshtra 143/5 in 17.1 overs | Target 184:  Maharashtra needs 41 runs off 17 balls with only five wickets remaining. The match has reached the climax and anything can happen now. Still, Odisha are favourites to win the match.

Bengal vs Himachal: Himachal 133/3 in 16 overs | Target 155: Himachal have played a smart game. They batted according to the situation and the required run rate. Let’s see if they can end it well. They need 22 runs from 24 balls with seven wickets remaining. The match is in their pocket in high probability.

Madhya Pradesh vs Delhi: Delhi 125/5 in 17 overs | Target 157: Delhi needs 32 runs from 18 balls and they have only five wickets left. Milind and Pawan Negi are batting currently.

Jharkhand vs Rajasthan: Jharkhand 92/2 in 15 overs | Target 121: Saurabh Tiwary has reached his fifty. Batting on 50 he has faced only 32 balls till now. Good comeback by them since they were two down for only 18 runs.  They need 29 runs in 30 balls to win from here onwards. They have eight wickets remaining.

Odisha vs Maharashtra: Maharshtra 123/5 in 14.5 overs | Target 184: Maharshtra are losing direction. They are losing wickets like cycles falling in a cycle stand. They have lost half their side in just a ball less than 15 overs. They require 61 runs from 31 balls from here on with nine wickets in hand.

Bengal vs Himachal: Himachal 110/1 in 14 overs | Target 155: Himachal have batted very well; just what the doctor ordered for them. They now need only 45 runs in six overs with nine wickets to go.

Madhya Pradesh vs Delhi: Delhi 101/5 in 14.1 overs | Target 157: Gautam Gambhir departs after a run  a ball 38. He was caught by Puneet Datey off the bowling of Ankit Sharma.

Kerala vs Tripura: Kerala 46/1 in 7.4 overs | Target 112: Sanju Samson and Rohan Prem are still at the crease batting on 20 and 19 respectively. There have also been seven extras in the innings. Kerala is inching closer to its target steadily.

Odisha vs Maharashtra: Maharshtra 81/3 in 10.1 overs | Target 184: Maharshtra have lost three important wickets in their chase of 184. They now require 103 runs off 59 balls to emerge victorious in the game. They have nine wickets in hand. Achievable but quite difficult.

Madhya Pradesh vs Delhi: Delhi 84/3 in 11 overs | Target 157: Another run-out. Aditya Kaushik departs for five runs. Gautam Gambhir is still in the middle, batting on 35 having faced 32 balls.

Jharkhand vs Rajasthan: Jharkhand 49/2 in 10 overs | Target 121: Both the openers— Virat Singh and Ishank Jaggi are back in the dugout. Saurabh Tiwary is batting along with Sumit Kumar at the moment.

Kerala vs Tripura: Kerala 29/1 in 4.4 overs | Target 112: Sanju Samson is batting on 11 having faced 12 deliveries. He has hit one six in his innings so far. Rohan Prem is batting at the other end on a run a ball 12 with the help of two boundaries. Jagadeesh was the only wicket that has fallen till now.

Odisha vs Maharashtra: Maharshtra 57/1 in 5.5 overs | Target 184: Khurana and Kedar Jadhav are at the crease currently after the early fall of Harshad Khadiwale. Maharashtra have got off to a flyer but they have to also make sure that they do not lose wickets in the endeavour as they are chasing a big target.

Bengal vs Himachal: Himachal 37/1 in 7 overs | Target 155: Alok Pratap Singh took the wicket of Raghav Dhawan, who got out for only one run.

Madhya Pradesh vs Delhi: Delhi 45/2 in 7 overs | Target 157: Unmukt Chand and Subodh Bhati are back in the pavilion for two and 16 runs respectively. Bhati was unfortunate to get run out. Gautam Gambhir is batting well on 23 off 22 balls. He has struck two boundaries so far.

Jharkhand vs Rajasthan: Jharkhand 19/2 in 5.5 overs | Target 121: Jharkhand’s troubles are not appearing to end. After having bowled so well, they are finding it difficult to chase down a lowly score of 120. They needed just one run more than run a ball when they started their innings. But now, they have already lost two wickets in just a ball less than six overs with just 19 runs on the scoreboard.

Kerala vs Tripura: Tripura 111 in 19.5 overs: Tripura are bowled out for 111. It was not just poor batting from Tripura but also quite good bowling from Kerala. For Kerala, Basil Thampi took a four-wicket-haul.

Odisha vs Maharashtra: Odisha 183/4 in 20 overs: Odisha end their innings on 183 in their allotted 20 overs. It is a very good score. Add to it, they were two down when there were just 11 runs on the board. Maharshtra will have to bat very well if they wish to chase down this score.

Jharkhand vs Rajasthan: Rajasthan 120/9 in 20 overs: Jharkhand restrict Rajasthan to a small score of 120. Now the impetus rests with their batters to chase this down.

Bengal vs Himachal: Bengal 117/3 in 16 overs: Sudip Chatterjee and Pramod Chandila both batting on 42. Pramod is particularly quick having faced only24 balls. Thus, he is batting with a strike rate of 175.

Jharkhand vs Rajasthan: Rajasthan 84/6 in 16 overs: Jharkhand is totally at top in the game currently. Let’s see if Rajasthan can reach somewhere around 120.

Odisha vs Maharashtra: Odisha 80/2 in 13.4 overs: Govinda Poddar and Biplab Samantaray at the crease

Madhya Pradesh vs Delhi: Madhya Pradesh 86/3 in 14 overs: Naman Ojha batting on 40 with the help of three boundaries and two sixes.

Jharkhand vs Rajasthan: Rajasthan 53/6 in 12.1 overs: Vikash takes a four-wicket-haul

Kerala vs Tripura: Tripura 32/4 in 7 overs: Udiyan Bose is at the crease batting on four having faced nine deliveries. Tough job ahead of him. Tripura is tottering on 32 for four.

Odisha vs Maharashtra: Odisha 31/2 in 7.1 overs: The two wickets that fell were of Rishikesh Das and Anurag Sarangi. Muthuswamy and Sanklecha took the wickets. Maharashtra is in commanding position in the game currently.

Bengal vs Himachal: Bengal 46/2 in 8 overs: Sudip Chatterjee is batting on 27 off 20 balls with the help of four shots to the fence.

Madhya Pradesh vs Delhi: Madhya Pradesh 45/2 in 9.2 overs: Pradeep Sangwan picked up both the wickets that fell. Delhi has an upper hand in the game as of now.

Jharkhand vs Rajasthan: Rajasthan 36/4 in 6 overs: Rajasthan is losing wickets in a heap and Vikash is bowling pretty well. He now has three scalps to his name. The last two wickets that fell were of PR Yadav and Rajat Bhatia off consecutive deliveries.

Kerala vs Tripura: Tripura 28/3 in 5 overs: Basil Thampi and Warrier are bowling very well. Thampi has picked two while Warrier has taken one wicket.

Odisha vs Maharashtra: Odisha 14/2 in 5.2 overs: Maharashtra have started well, they have picked two quick wickets early on in the match

Bengal vs Himachal: Bengal 36/1 in 6 overs: It has been a decent start by Bengal if not a flyer. They are batting at run a ball after the end of six overs. Wriddhiman Saha has been the lone wicket to fall. He was caught by Chauhan off his own bowling for a duck.

Madhya Pradesh vs Delhi: Madhya Pradesh 34/2 in 7 overs: Jalaj Saxena and Naman Ojha are at the crease now. Zafar Ali and Ishwar Pandey were the wickets that fell.

Jharkhand vs Rajasthan: Rajasthan 25/2 in 4.2 overs: It has not been a good start by Rajasthan. They have lost both their openers— Suwalka and Lamba early on in the game. Manu Kumar and Vikash have picked up one wicket each.

Jharkhand vs Rajasthan: Rajasthan 16/2 in 2.5 overs

Kerala vs Tripura: Kerala won the toss and decided to field first

Bengal vs Himachal: Bengal win the toss and decide to bat first

Madhya Pradesh vs Delhi: Delhi wins the toss and decides to bowl first

Jharkhand vs Rajasthan: Rajasthan won the toss and elected to bat first

As of now most of the teams are on equal sides, while some are looking to gain their first win. Thus, another great session is expected to be in the store as the teams aim to fight it out for the quarter-final spot and earn the ultimate national T20 glory. 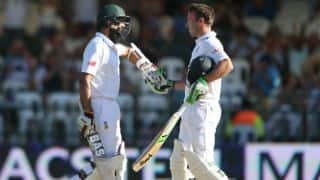