Catch Live Updates of Day Three of action of the Ranji Trophy 2015-16 clash between Tripura and Jharkhand at Agartala.

Hello and welcome to CricketCountry’s live coverage of Day Three of the Group C game of the 2015-16 Ranji Trophy between Tripura and Jharkhand at Tripura Institute of Technology Ground, Agartala. So far in the match the expected has happened. The weak Tripura have been dominated by Jharkhand. Tripura were bowled out for 166 thanks to a six-for by Rahul Shukla. Shukla tore through the fragile Tripura top-order and took five of the top seven wickets. Tripura in response were quite ineffective allowing Jharkhand to get to 296 for the loss of just three wickets at stumps on Day Three. Complete coverage of Ranji Trophy 2015-16

LIVE CRICKET SCORE: Tripura 31/3, 166 | Jharkand 394 decl | Overs 20 | BATTING: Parvinder Singh 1(6), Sen Choudhury 4(7): After 20 overs into Day 3, Tripura trail the visitors by 197 runs with seven wickets to spare.The alst dismissal made by Jharkand was Virag Awate’s wicket. He scored 21 from 61 balls before giving a catch to Sumit Kumar off Rahul Shukla’s bowling in the 19th over. OUT! Udiyan Bose c Ishank Jaggi b Shahbaz Nadeem 2(36) OUT! Virag Awate c Sumit Kumar b Rahul Shukla 21(61)

LIVE CRICKET SCORE: Tripura 5/1, 166 | Jharkand 394 decl | Overs 8 | BATTING: Virag Awate 3(23), Udiyan Bose 0(15): After eight overs into Day 3, Tripura trail visitors by 223 runs with nine wickets to spare. They lost their opening batsman Arindam Das early to Jaskaran’s bowling. He scored just two runs off 10 deliveries before getting bowled on the second ball of the fifth over. OUT! Arindam Das b Jaskaran 2(10)

Jharkhand are already leading by 130 runs and they still have seven wickets in hand to score a lot more runs to go for an innings victory. They had two batsmen who scored in their nineties but failed to score hundreds. Anand Singh was out for 91, while Saurabh Tiwary was out for 94. Ishank Jaggi has scored an unbeaten 51 and will look to breach the elusive three-figure mark.

Jharkhand can afford to be expansive and aggressive in their approach on Day Three and it is likely that that will be the case. Tripura will have to pull off something exceptional to make a comeback in the match. So far only Manisankar Murasingh has looked threatening with figures of 2 for 52. Jharkhand surely has the big upper hand in the match and the smell of an innings win beckons them. It will be difficult for Tripura to evade such a happening. 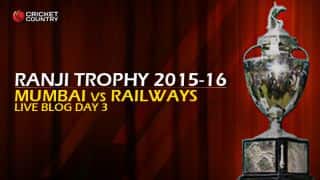 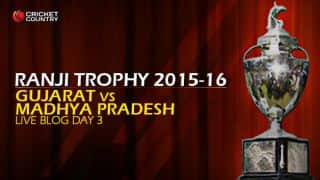