A good day for England means that they are almost close to dominating this game. They did not start Friday that well, losing Roy cheaply but that was about it. Skipper Root and Burns survived some superb but luckless fast bowling from Australia as the ball took the edge and went everywhere but to hand. Their 132-run stand frustrated Australia and that made it pretty much easy for the batsmen afterwards to blunt the already tired attack.

STUMPS ON DAY 2: Take a bow, Rory Burns. He has batted the whole day and kept Australia at bay, not allowing them to get into the middle order. For a man whose position in the team was questioned, he has certainly answered in fine style.

Over 89.6: Nathan Lyon to Rory Burns. no run, Full and around leg, pushed towards mid on. STUMPS ON DAY 2, ENGLAND TRAIL BY 17!

Over 82.2: A late call for an LBW review. Looks to be a waste, to the naked eye. Pitching outside leg, even the height could be a factor. Ball Tracker is coming… and sending Australia’s review into the bin. PITCHED OUTSIDE LEG. Poor, poor call from Paine.

75 overs: And to bowl the 76th over… it’s SURPRISE ENGLAND! Ho ho! Who has come onto bowl? MATTHEW WADE! What does he bowl? Medium pace. Let’s see…

Over 70.3: Nathan Lyon to Rory Burns. 1 run, NOT OUT! Burns is well in! He can continue his celebration. The whole ground is on its feet to applaud the effort. His first ton and it has come at a very important time. Yes, he has had luck on his side but he still has showed great character in this knock. He gets there by working it wide of mid on. He sets off. The fielder scores a direct hit at the non-striker’s end. The players appeal but Rory is already celebrating. The umpire takes it upstairs and replays show that the batter is in.

Over 62.1: James Pattinson to Joe Denly. out, OUT! LBW! That is plumb in front! The change of ball does the trick for Australia. Also, very good bowling by Pattinson. He set up Denly excellently. He kept taking the ball away in his last over. This time, he gets the ball to come back in. It starts from outside off, the length too is fuller. Denly looks to drive but misses as he plays outside the line. The ball hits the back pad. An appeal follows and the umpire raises the finger. Denly does have a chat with his partner but does not review. Rightly so as Hawk Eye shows three reds. A budding stand comes to an end. England are 95 away from Australia’s first innings score. Another wicket quickly and Australia will be right back into the contest.

Over 55.6: Peter Siddle to Joe Denly. no run, A mild LBW appeal to end the session. On a good length outside off, Joe looks to defend but the ball comes in a long way and hits him on the groin. Hawk Eye shows it to be going over the stumps. TEA ON DAY 2, England trail by 114!

Over 49.6: Peter Siddle to Joe Root. out, OUT! Stunning caught and bowled! At last, at long last, at long long last, Australia get a wicket. After toiling for hours, with edges not going to hand, Siddle has struck. Full and around off, Root drives this straight back, but does not bother to keep it down.

Over 47.1: Pat Cummins to Joe Root. FOUR, On the hips of Root who clips it fine to reach his half-century, 42nd half-century for the England skipper. The delivery was shorter on length, angling away. Bread and Butter for Root, that delivery.

Over 32.1: Nathan Lyon to Rory Burns. FOUR, Fifty for Rory Burns! What a time to get back into form. He was really struggling for runs but rises to the occasion here. 3rd Test fifty for him. He has looked cool, calm and composed throughout his innings. He needs to make it count now. This is on the pads, Burns works it fine on the leg side and takes two.

The Australian bowlers were very good! Especially Pattinson. he was a delight to watch. However, Cummins was not at his best and Lyon, who got a lot of purchase of the surface also did not bowl the way he would on such a wicket.

The session started with Australia getting Roy early. Root and Burns then rode their luck and hung in there. The former was knocked over but the bails did not come off and the Australia missed a chance of a review against the latter. They are amidst a 49-run stand and England would hope the two continue.

A very, very good session of Test cricket is what we just witnessed! Some disciplined bowling and very good batting too from the English side. Yes, they did have luck on their side but take nothing away from the way they have battled in conditions where there is some assistance for the bowlers. You can probably say the game is probably in the balance but England can be termed as the happier side but by just at the moment.

50 runs for ENG Over 19.1: Peter Siddle to Rory Burns. 2 runs, Fuller length but bit wide, Burns directs it towards third man for a couple which brings up Fifty for England.

Over 7.2: James Pattinson to Jason Roy. out, OUT! EDGED AND TAKEN! Pattinson draws first blood and he deserves this wicket. He has been excellent today morning and he gets his reward. Also, he has troubled Roy throughout and this was probably on the cards. Another lovely delivery by Pattinson. It pitches on off and it is on a length. It takes off after pitching. Roy is drawn into the stroke. He tries to drop his hands at the end but the ball kisses the outside edge and goes low to Smith at first slip. He takes a good catch. James is pumped up and Australia get rid of the dangerous Roy early. England trail by 262.

ENG 10/0 (2.0 Ovs): Down and out in the dumps. Bring out the sandpaper! Boo Smith! One of the culprits, Warner, dislodged cheaply despite a reprieve. Another culprit, Bancroft, not lasting long either. How long will Steve Smith last? Ask again. How long will Steve Smith last? Long. Very long. Lasting till the very last ball of the innings. On a day when nothing much seemed to go right for Australia, this man stuck his guts out like wet sand sticks onto dry paper, making the Barmy Army eat humble pie. A day which saw the Aussies tottering at 122/8, ended with OZ finishing with 284. Of which, the former skipper scored JUST 144. Yes, just. What a way to begin the opening day of the 2019 Ashes. We now welcome you to the second day of the first Test between England and Australia at Edgbaston.

Steve Smith marked his first Test since completing a 12-month ban for his role in a ball-tampering scandal with a superb century to rescue Australia on the opening day of the Ashes series on Thursday.

Australia were in dire straits against England in Birmingham at 122/8 but their last two wickets more than doubled the score and Smith was last man out for 144 in a total of 284.

Rory Burns and Jason Roy then survived two overs as the hosts ended the day on 10/0.

Former captain Smith, who returned to international cricket during the recent World Cup that England won, was subjected to repeated jeers by a partisan crowd. But he answered the boos in style with his 24th Test century and ninth against England.

It hasn t really sunk in yet, Smith told BBC Radio. Obviously been a while since I ve been able to put on the whites and the baggy green (cap). I m really proud of the way I was able to stand up today. We were in a bit of trouble there and we had to dig deep on a wicket that wasn t easy.

Australia had slumped to 17/2 when Smith came in to bat after current skipper Tim Paine had won the toss. Wickets fell steadily but Smith found the ally he needed in Peter Siddle, with the recalled number 10 making a valuable 44 the second-best score of the innings in a ninth-wicket partnership of 88. 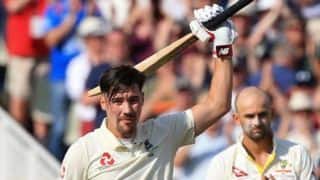