Catch live updates of Day 4 of Vidarbha vs Assam's Round 4 match here.

Hello and welcome to CricketCountry’s live coverage of Day 4 of the Group A game of the 2015-16 Ranji Trophy between Vidarbha and Assam, live from Jamtha, Nagpur. For the second time in two matches Assam are on the verge of squandering a first-innings lead. As things stand now, Vidarbha, chasing 213, are on 88 without loss with Faiz Fazal, and more importantly, Wasim Jaffer at the crease. They need another 125, but they have all wickets standing — and that includes captain Subramaniam Badrinath and the in-form Ganesh Satish. Vidarbha are easily the favourites going into Day Four unless they collapse dramatically. READ: Ranji Trophy 2015-16, full coverage here

Live cricket scores Vidarbha 215/7 | Target 213| Overs 74| Batting: SS Ruikar 4(6), Umesh Yadav 6(2): Assam bowlers— Amit Verma and Purkayastha came back very strongly and took the next five wicket for just nine runs i.e. when Vidarbha were batting on 200 till they reached 209. Extraordinary cameo performance by the duo. Umesh Yadav came to bat after AA Shanware’s departure and struck a big six and helped Vidarbha win the match. When Vidarbha was 209 for seven it appeared that Assam will win the game, since they were bowling extremely well but Umesh ruined their hopes. Vidarbha won the match by three wickets, although it did get very interesting in the last six overs. Vidarbha lost five wickets in the last five overs. Assam bowlers made a breathtaking comeback in the game but they fell short of about only 30 runs. If they had few more runs on board, match could have gone their way too. Vidarbha take home six points from the game. OUT! Ganesh Satish c Rishav Das b Purkayastha 17(66), S Badrinath c Pallav Kumar Das b Amit Verma 37(51), SU Shrivastava c Pallav Kumar Das b Purkayastha 0(4), JM Sharma c Tarjinder Singh b Amit Verma 4(4), A Shanware c Gokul Sharma b Purkayastha 1(8)

Live cricket scores Vidarbha 191/2 | Target 213| Overs 68| Batting: Ganesh Satish 16(63), S Badrinath 33(42): Fazal is out for 63. S Badrinath is batting at the moment along with Ganesh Satish. Vidarbha now need 22 runs to win. They have fought well in the match after they conceded a first innings lead of 52 runs. Both their bowlers and batsmen have played good cricket in the last two days. OUT! FY Fazal c&b Syed Mohammed 63(184)

Live cricket scores Vidarbha 140/1 | Target 213| Overs 52| Batting: FY Fazal 54(165), Ganesh Satish 7(28): Vidarbha lose their first wicket Wasim Jaffer. He makes 71 with the help of eight boundaries. Vidarbha now need 73 more runs to win. Unless Assam bowlers do some wizardry this match is mostly over for them. FY Fazal is patiently batting on 54, Ganesh Satish is at the other end. OUT! Wasim Jaffer c Kunal Saikia b Amit Verma 71(119) 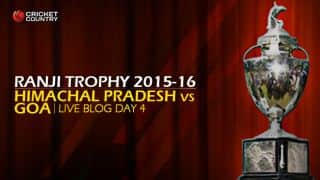