Catch the live action of the Vijay Hazare Trophy 2015-16 match between Goa and Himachal Pradesh at Rajkot.

Hello and welcome to CricketCountry’s live coverage of Goa and Himachal Pradesh, Group D match at Rajkot. Himachal Pradesh are in second spot in the table with two wins from three games, they are below table toppers and second position via a inferior net run-rate of  just (+0.732)by a superior net run-rate(+0.740) than Saurashtra. Goa is in the bottom of the table with zero points from three games, they have lost all their game in the Vijay Hazare Trophy 2015-16 so far. Himachal Pradesh in their last match were impressive in their win over Saurashtra by seven wicket. Vijay Hazare 2015-16: Full coverage here

LIVE CRICKET SCORE: HIM 187/3 in 29.2 Overs | Goa 184 | BATTING: PK Dogra 34 (47), RR Dhawan 31 (32) — Himachal Pradesh have cruised to an emphatic victory over Goa here in Rajkot. Chasing an easy 185 on a good batting strip, Himachal dominated the proceedings right from the beginning. Their openers Prashant Chopra and Ankush Bains gave a flying start to the team, adding 80 in just 10 overs. Shadab Jakati’s introduction in the middle overs did peg them back a bit, but overall, their batting was far more superior in the end. Goa on the other hand struggled throughout. Their batting failed to give them a good score to defend. And later on, the bowlers simply had no answer to Himachal’s attacking game-plan.

With this win, Himachal have now earned 4 more points in their Vijay Hazare Trophy campaign. Goa will have to go back to the drawing board and see what went wrong and where they can improve. That’s all from here, Ciao!

LIVE CRICKET SCORE: HIM 166/3 in 24 Overs | Goa 184 | BATTING: PK Dogra 20 (21), RR Dhawan 25 (26) — Paras Dogra and Rishi Dhawan have taken Himachal Pradesh to a sniffing distance of win against Goa in this Vijay Hazare Trophy fixture. After losing three quick wickets in the middle overs, it was important for Himachal not to lose any more wickets. Both Dogra and Dhawan have played sensibly and haven’t let their side lose the control in the game.

LIVE CRICKET SCORE: HIM 133/3 in 18 Overs | Goa 184 | BATTING: PK Dogra 13 (10), RR Dhawan 1 (2) — Himachal Pradesh have stumbled a bit, losing two quick wickets. The introduction of spin was expected to put the brakes on run-scoring. However, the senior pro Jakati has even picked up three wickets in the bargain. Even with these hiccups, Himachal are expected to sail through comfortably. Rishi Dhawan has come out now to join Paras Dogra.

LIVE CRICKET SCORE: HIM 106/1 in 14 Overs | Goa 184 | BATTING: PS Chopra 36 (28), R Bist 8 (10) — Shadab Jakati got his team the much needed breakthrough by removing opener Ankush Bains, who was going great guns till a Jakati delivery disturbed his timber. The loss however has not deterred Chopra, who has completed his half-century. He has hit a couple of sixes in his knock. Robin Bist has joined him in the middle.

LIVE CRICKET SCORE: HIM 69/0 in 8 Overs | Goa 184 | BATTING: AK Bains 31 (21), PS Chopra 36 (28) — The Himachal openers are on a song! Both Chopra and Bains look in a hurry to finish this game off. They have raced to 69 in just eight overs. Chopra was brutal from the onset, but Bains joined the party later. Both the batsmen have so far hit six boundaries and one six each. The Goa bowlers are doing some sloppy work here. Their pacers have been taken to the cleaners. Experienced Shadab Jakati has been introduced now.

LIVE CRICKET SCORE: HIM 28/0 in 4 Overs | Goa 184 | BATTING: AK Bains 5 (7), PS Chopra 22 (17) — Himachal Pradesh have got off to a flying start against Goa. Chasing 185 to win, the team from the northern terrains have raced to 28 runs in four overs. Opener PS Chopra has struck five boundaries so far in his unbeaten 22. Ankush Bains, on the other hand, is taking his time. Chopra seems to be in a hurry, as he has unleashed a flurry of boundaries from the onset.

Himachal Pradesh openers are walking out in the middle.

LIVE CRICKET SCORE: GOA 184 in 45.4 Overs; BATTING: G Narvekar 6 (9) — Goa’s shambolic batting display has come to an end as their innings has folded to 184. After a good opening stand of 62 runs for the first wicket and a further 46 for the second wicket, their batsmen simply lacked application and kept getting out after the starts. After being 3 for 139, they lost last 7 wickets for just 45 runs. A lot of credit must go to Himachal bowlers too, who kept coming hard at Goa batsmen and were rewarded for their consistency. Jaswal picked 3, while Bipul, RK Singh and NR Gangta took 2 wickets each. Rishi Dhawan took a solitary wicket. Himachal will be back in a while with their chase. We will bring you the coverage.

LIVE CRICKET SCORE: GOA 168/7 in 42 Overs; BATTING: S Jakati 1 (1),  RR Singh 0 (0) — Goa innings has gone haywire! They have completely lost the plot here as the last three wickets have fallen pretty quickly. Bandekar and Misal, last of the established batsmen, did not convert their starts and fell cheaply. Amit Yadav too came and went back quickly. It’s time for the tail now and will have to wait to see if it can wag or not.

LIVE CRICKET SCORE: GOA 155/4 in 37 Overs; BATTING: S Bandekar 23 (31), D Misal 6 (13) — GONE!!! Goa have lost their skipper Sagun Kamat, who was looking well set for a big one here. He was caught by Himachal captain Bipul Sharma off Rishi Dhawan’s bowling. Darshan Misal has now joined Bandekar in the middle. Misal has had a great Ranji season this year. Let’s see if he can translate his Ranji performances into his List A ones.

LIVE CRICKET SCORE: GOA 137/3 in 32 Overs; BATTING: Sagun Kamat 56 (92), S Bandekar 12 (17) — Goa have managed to reach to the score of 137 for the loss of three wickets. Things are looking good for them at the moment with skipper Kamat still out there. Himachal Pradesh bowlers have done well after conceding an opening stand of over 50 runs. It will be interesting to see how far Goa can stretch their score. To make a match out of it, they must aim for a score in excess of 250.

LIVE CRICKET SCORE: GOA 113/3 in 27 Overs; BATTING: Sagun Kamat 43 (77), S Bandekar 1 (2) — Goa have lost Keenan and Reagan Pinto in quick succession. Their innings isn’t shaping up the way they would have ideally liked it. After a good start, they are now 3 down for 113. Though skipper Kamat is still around, others are getting out after the starts. Keenan became Himachal skipper Bipul Sharma’s second victim while Reagan Pinto was cleaned up by R Singh.

LIVE CRICKET SCORE: GOA 77/1 in 16 Overs; BATTING: Sagun Kamat 21 (37), Keenan 6 (11) — Goa have lost Asnodkar for 37. That has been the case with him. He tends to throw away the starts very often. Here too he was well set for a good score but danced down the track to Himachal skipper Bipul Sharma’s delivery and got stumped. Kamat is still going steady at the other end, while wicket-keeper batsman Keenan is the new man in.

LIVE CRICKET SCORE: GOA 60/0 in 12 Overs; BATTING: Swapnil Asnodkar 34 (42), Sagun Kamat 21 (37) — Goa openers have continued to dominate the first hour of the play in this Vijay Hazare Trophy fixture against Himachal Pradesh. Domestic pro Swapnil Asnodkar, who was once a star opener for the Rajasthan Royals (RR) franchise, is unbeaten on 34. Giving him company is Sagun Kamat, who is unbeaten on 21.

LIVE CRICKET SCORE: GOA 43/0 in 8 Overs; BATTING: Swapnil Asnodkar 24 (26), Sagun Kamat 17 (24) — Steady start by the Goans as the openers make sure that they bat steady and do not lose the opening wickets and suffer initial setback.

Goa in their previous match lost to Madhya Pradesh as a 74 by Harpreet Singh and Jalaj Saxena’s 69 helped MP beat Goa by seven wickets in the Vijay Hazare Group ‘D’ match. Electing to bat, Goa were bundled out for 214 in 43.2 overs at the Madhavrao Scindia cricket ground as MP reached the target after losing just three wickets with 46 balls to spare. Goa’s Swapnil Asnodkar and Saurabh Bandekar made 68 runs each but other batsmen failed miserably.
For Himachal Pradesh Rishi Dhawan and Ronit More picked up three wickets apiece, restricting Saurashtra in their last match to  195 runs in 48.8 overs, as HP chased down the total in 43.2 overs. Ankur Bains top-scored for HP with 76 off 109 balls, while Robin Bist made 44 off 64, as they completed the task with more than 40 balls to spare by reaching 197 for three.

Prashant Chopra (32) and Paras Dogra (25*) were the other two contriburors for HP with the bat. 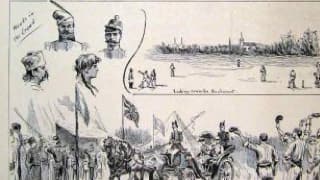 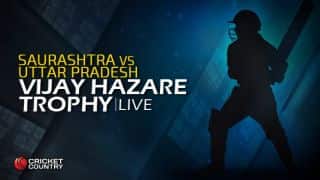