Gujarat have won both the matches so far, whereas Karnataka have won just won one.

Hello and welcome to CricketCountry’s live cricket blog of the Vijay Hazare Trophy 2015-16 tournament, between Gujarat and Karnataka at Alur Cricket Stadium, Bangalore. Karnataka managed to register a win in the first match but slumped to a defeat in their next, whereas Gujarat have been rampant in the tournament so far as they have won both the matches they have played in. Karnataka will look to win the match and ensure that the gap between them and the rest of the teams do not widen. Gujarat will look to use their momentum to good use and register a win against the reigning champions. Complete Coverage: Vijay Hazare Trophy 2015-16

LIVE CRICKET SCORE: Gujarat 173/7| Overs 42| Target 234 | BATTING: Rohit Dahiya 5(3), Rush Kalaria 0(0): Gujarat lose two more wickets in the form of Chirag Gandhi and Jesal Karia. Chirag scored 43 off 63 balls. He did not hit any boundary or six in his knock. Vinay Kumar sends Karia back to the dugout for five runs. Since, the match got stuck at 40th over mark due to bad light, it appears that VJD system will come into picture. According to VJD method, Gujarat requires 32 runs to win from here on.  OUT! Chirag Gandhi c KL Rahul b Abhimanyu Mithun 43(63), OUT! Jesal Karia c Stuart Binny b Vinay Kumar 5(4)

LIVE CRICKET SCORE: Gujarat 160/5| Overs 40| Target 234 | BATTING: Chirag Gandhi 40(58): Akshar Patel is stumped for 27 runs. For Karnataka, Suchith Jagadeesha and Shreyas Gopal have picked two wickets each while Pravin Dubey has one scalp to his name. Gujarat have lost half their side after 40 overs for 160 runs. They need 74 runs in 10 overs with five wickets in hand from here on. Chirag Gandhi needs 10 more runs to reach his half century. OUT! Akshar Patel st Sadiq Kirmani b Jagadeesha Suchith 27(41)

LIVE CRICKET SCORE: Gujarat 108/4| Overs 29| Target 234 | BATTING: Chirag Gandhi 12(28), Akshar Patel 3(5): Gujarat lose two wickets in quick succession. Priyank Panchal is stumped by Sadiq Kirmani on Pravin Dubey’s bowling. Priyank was dismissed moments after he reached his fifty. He hit four shots to the fence in his innings. Manpreet Juneja came next and he did not trouble the scorers and was cleaned up for a duck by Shreyas Gopal. OUT! Priyank Panchal st Sadiq Kirmani b Pravin Dubey 52(77), OUT! Manpreet Juneja b Shreyas Gopal 0(2)

LIVE CRICKET SCORE: Gujarat 66/1| Overs 16.3| Target 234 | BATTING: Priyank Panchal 33(53), Rujul Bhatt 1(1): Smit Patel misjudges Jagadeesha Suchith’s delivery and is bowled. Thus, Karnataka succeed in drawing first blood. Rujul Bhatt has come to the middle after the departure of Smit. Gujarat now requires 168 runs in 33.3 overs to win. No one is a clear favourite to win the match from here on; the match is more or less in balance. OUT! Smit Patel b  Jagadeesha Suchith 25(46)

LIVE CRICKET SCORE: Gujarat 24/0| Overs 5.5| Target 234 | BATTING: Smit Patel 8(16), Priyank Panchal 11(19): Gujarat have started their chase of Karnataka’s 233. They have not lost a wicket after the end of 5.5 overs. Both Smit Patel and Priyank Panchal are taking their time to settle down, having struck only a boundary each. Gujarat now needs 210 runs from 265  balls with all 10 wickets in hand.

LIVE CRICKET SCORE: Karnataka 233/8| Overs 50| BATTING: Manish Pandey 94(123), Jagadeesha Suchith 0(0): Karnataka finish their innings on 233 for eight. It is a decent score but certainly not a match winning one. Manish Pandey missed out on his century and remained unbeaten on 94. Akshar Patel, Mehul Patel and Jasprit Bumrah picked up two wickets each. OUT! Pravin Dubey c Jesal Karia b Jasprit Bumrah 10(13), OUT! Vinay Kumar c Jesal Karia b Rush Kalaria 7(8), Mithun A c Akshar Patel b Jasprit Bumrah 7(5)

LIVE CRICKET SCORE: Karnataka 186/5| Overs 44 | BATTING: Manish Pandey 73(107), Pravin Dubey 2(6): Mayank Agarwal is caught by Jesal Karia off Akshar Patel’s bowling. He scored 58 with the help of three boundaries. Stuart Binny and Karun Nair soon follow suit. Manish Pandey is batting on 73 along with Pravin Dubey, who is new to the crease. Karnataka will be hoping that they reach somewhere between 240-260. OUT! Mayank Agarwal c Jesal Karia b Akshar Patel 58(77), OUT! Stuart Binny c Priyank Panchal b Jesal Karia 24(30), OUT! Karun Nair c Priyank Panchal b Akshar Patel 8(10)

LIVE CRICKET SCORE: Karnataka 72/2| Overs 20.3 | BATTING: Mayank Agarwal 39(54), Manish Pandey 16(35): Mehul Patel sends two Karnataka batters back to the dugout. Before cleaning up Sadiq Kirmani, he got KL Rahul caught by Smit Patel. Manish Pandey has arrived at the crease. He is taking his time to settle down. Mayank Agarwal is approaching his half century. Both Mayank and Manish are good batsmen and Karnataka fans will be hoping that their partnership grows and blossoms. OUT! KL Rahul  c Smit Patel b Mehul Patel 8(21), OUT! Sadiq Kirmani b Mehul Patel 6(13)

LIVE CRICKET SCORE: Karnataka 26/0| Overs 8.2 | BATTING: Mayank Agarwal 18(30), KL Rahul 8(20):  It’s a slow and steady start for Karnataka. Both Mayank Agarwal and KL Rahul are batting sensibly and with discipline. Mayank has also struck a boundary; it is the only shot hit to the fence till now.

Toss: Gujarat won the toss and decided to bowl first

For Gujarat Akshar Patel has been in excellent form with bat and ball. He has scored 107 runs in the tournament so far with a fifty to his name and has done well with the ball as well. For Karnataka, skipper Vinay Kumar has led with both bat and ball. He has scored a couple of forties and also opened the bowling for his side. The injury to Robin Uthappa is a big blow for them and will require the likes of Karun Nair, Mayank Agarwal and Manish Pandey to step up and score some runs. Vinay Kumar has picked up six wickets in two matches that he has played in so far.

Both Karnataka and Gujarat have failed to make it to the knockout stages of the Ranji Trophy 2015-16. Karnataka won the tournament two times in a row under the leadership of Vinay Kumar and will be disappointed. They can however redeem themselves by retaining the Vijay Hazare Trophy. 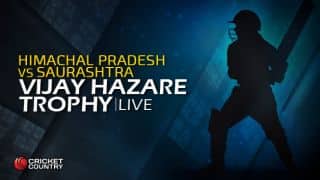 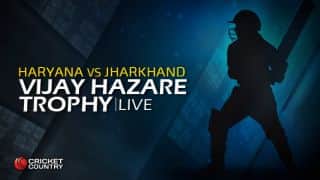