Catch the live updates of the day's play here.

(Can West Indies carry their momentum over from the Barbados victory against England? Or will the newly-crowned World Champions run over the hosts? Catch live cricket scores and updates here)

As the Day 1 play session comes to a close, although a low scoring, but has been a close contest so far. West Indies getting bowled out for a mere 148 on Day 1 is a matter of concern for their batting. However, credit goes to the Australia team for their good bowling show.

The West indies team are also to be praise for showing the never give up attitude as they too have kept Australia on a tight foot, claiming three quick and early wickets as Australia too continue to struggle on this surface. Credit goes to the West Indies bowlers for their impressive show so far and would be a crucial first session for both the teams.

Until then, it’s good bye from Rishad D’Souza here and will see you tomorrow for the second day. However, before you leave, read our Day 1 report here.

Three quick dismissals, but still a steady innings continued to be played by the Australians. Adam Voges seems to on a mission to hit the balls, while Steven Smith continues to bat sensibly.

GONE!!!!! This is surely a big blow for Australia as the veteran player as well as skipper, Michale Clarke has to depart for just 18 after being caught behind by Denesh Ramdin off Devendra Bishoo. Just as it seemed the pair could come handy, the break-through occurs. Adam Voges comes in.

Australia continue their slow and steady form of play, following the dismissal of Shaun Marsh. The experienced and talented pair of Steven Smith and Michael Clarke is bound to come handy for the Australian side.

GONE!!!! Shaun Marsh falls for 19 to Jason Holder. First ball of his fresh over, shirt and slightly out side off, Marsh looks to play it over point, however gets a thick outside edge and straight to Darren Bravo at first slip. Veteran Micahel Clarke comes in to join Steven Smith.

Australia continue to maintain a steady ship as both the batsmen tend to play calm and keep their innings composed. The bowlers too tend to bowl tight, hardly giving any room and allowing the batsmen to free their arms.

Slow start to the Australian innings as well. Early setback for Australia as they lose explosive opener, David Warner for mere eight, but it doesn’t seem to have bothered the Australians as they continue to batii still, but in a slow and steady fashion. Good start by the West Indian bowlers as well, bowling at good line and length.

GONE!!!! David Warner is dismissed for mere eight. Short on leg stump from Jerome Taylor, Warner looks to defend towards leg, but takes the outside edge, pops up in the air and easily taken by Jermaine Blackwood at point. Steven Smith comes in at number three.

West Indies have been bowled out for 148.

Jerome Taylor has been dismissed by Steven Smith, but most of the credit should actually go to debutant Adam Voges who took a ripper of a catch at square leg. Taylor went for the pull shot of a shortish ball, but got the top edge Voges was standing in close and had to run back over his shoulder to catch that, he did that and put in a timely dive to take it.

And Jason Holder has fallen and with that West Indies final hopes of staging a revival in this innings. Holder got a start but like most others in the line up, decided to throw it away with a rash shot against a ball which moved. He attempted to drive but completely mistimed it and it edged to gully where S Marsh took a clean catch! Mitchell Starc gets his second.

Densh Ramdin and Jason Holder were looking really good but Mitch Johnson has broken Ramdin’s stumps and what seemed to be budding into a recovery-partnership! It’s close to over for West Indies now, unless Holder inspires his partners to stay put and score at least 250 runs.

These two batsmen are attempting to pull off a rescue operation. The flurry of wickets have been temporarily stopped and these two will want to build on the little base they have here. Australia will be aware that Holder is no mug with the bat and in recent times has actually scored more runs than some top order West Indian batsmen. Denesh Ramdin is capable of resilient knocks as well.

And now Blackwood falls to Hazlewood. Very poor shot, it was a back of length delivery outside off and Blackwood needlessly poked at it, getting the thick edge which flew to second slip where Clarke took a fine catch again. That is Hazlewood’s third wicket, he’ll have eyes on a fifer! In the next over another bites the dust, Marlon Samuels goes for the pull to a Mitchell Starc bouncer, gets the top edge and is caught at deep fine leg! Horrible session for West Indies!

And Australia find success in the second over after lunch! Josh Hazlewood has success! West Indies desperately need a partnership here. The bowl was back of a length on off and swinging in, Dowrich thought of forcing it through the off side but dragged it on! Jermaine Blackwood is the new man in.

And West Indies are digging their own grave here. Hope was getting greedy for one boundary too many and has paid the price by nicking off Mitchell Johnson’s bowling to gully where Shaun Marsh took a sharp catch. West Indies are under plenty of pressure now and they’ll desperately want Dowrich and Marlon Samuels to be more patient.

Nathan Lyon was looking very dangerous right since the word go, he was procuring massive turn from the dry pitch at Dominica and got Darren Bravo to nick one to first slip, where Michael Clarke reached out to his right to take it safely, with one hand! Windies in some trouble here! Dowrich is the new batsman in.

The West Indian batsmen have looked shaky on occasion but they are keen on playing with positive intent. Shai Hope is keeping the run flow going. The Australian bowlers have been quite good and have beaten the outside edge on a few occasions Mitchell Starc has gone for a few runs but has maintained his intensity.

Josh Hazlewood has made the early breakthrough for Australia on a docile pitch. Brathwaite was guilty of poking outside off and found the edge, which Brad Haddin pouched safely. The wicket will put West Indies under a lot of pressure. The new batsman in is Darren Bravo and he’ll look to steady the ship with Shai Hope.

Mitchell Johnson bowls the first over. No much swing on offer for the bowlers. Plenty of runs to be had once the batsmen get settled. Brathwaite got three runs off that over, decent start.

Australia are wearing black armbands in tribute to the late Richie Benaud, since it is their first Test since his passing. Benaud was a household name in Australia and a prominent figure across the cricketing world. He was earlier known for the leg-spinner’s guile with the ball, later he probably shot himself to further fame as a TV presenter. Even the West Indians are wearing the band.

TOSS UPDATE: West Indies have won the toss and chosen to bat first.

Hello and welcome to CricketCountry’s live blog of the first day of the opening Test between West Indies and Australia at the Windsor Park in Roseau, Dominica, on Wednesday. This is Rishad D’Souza, and I will be presenting to you the live updates from the day’s play. Preview: West Indies vs Australia, 1st Test at Dominica

The series will be Australia’s first engagement in international cricket since their victory against New Zealand in the final of the ICC Cricket World Cup 2015, which was their fifth World Cup victory. The visitors will be captained by Michael Clarke, who retired from One-Day Internationals (ODI) following the World Cup win. The squad is well-balanced, with a bowling attack that consists of the likes of Mitchell Starc, Mitchell Johnson as well as the services of Josh Hazlewood. READ: Chris Rogers’s absence will hurt Australia

West Indies will certainly be no walkover as the world perceives them to be. The infantile comment of labelling the hosts ‘mediocre’ by England and Wales Cricket Board (ECB) chief Colin Graves denied England a series win in the Caribbean as the hosts came out fighting, and drew the series 1-1. The West Indies played really well throughout the two Tests, and there is no reason why they cannot carry the momentum against Australia in the upcoming series. READ: Are we witnessing the rise of West Indies 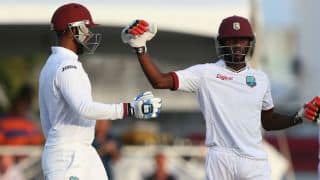 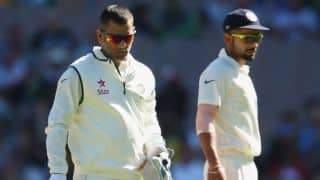