Catch the live updates of the day's play here.

(Can West Indies prove lethal enough with the ball to keep their side in the game or will Australia dominate with the bat? Catch live cricket scores and updates here)

So, clearly, Australia finish Day 2 on top, following the brilliant and impressive century from debutante, Adam Voges. They have also been successful in claiming a couple of early wickets, putting the West indies on the back foot, early in the second innings. It would be interesting to see now how things fair on Day 3 and the first session is going to be crucial again as the West Indies would look to avoid any disaster, while Australia would look to bowl them out as soon as possible on a low total. And given their venomous bowling line-up, Australia are well capable of doing so.

Well, that’s it from now, see you again tomorrow with live updates from Day 3. Till then, it’s good night from Rishad D’Souza, and before you leave, take the pleasure of reading Day 2 report here.

GONE! a frsh start to the innings, but a shaky one as a banged in delivery from spearhead, Mitchell Johnson results in a poor defensive shot, as an outer edge is carried to Michael Clarke at first slip.The very next ball of a fresh over form Mitchell Starc leads to the dismissal of Kraigg Brathwaite for 15 as he is bowled by him. Darren Bravo and Shane Dorwich are the new men in.

Australia have been bowled out for 318.

Australia are on a roll following the healthy knock from Adam Voges who still continues to bat strong against a decent bowling line-up of the West Indies. The partnership has almost approached 100 runs and it seems to be a bit frustating for the West Indies bowlers, unable to get the final pair out as the 300 runs come up for Australia.

Adam Voges seems to be unstoppable at present as he has crusied to his maiden Test century on debut. He also becomes the third oldest player to score a century on Test debut as the tea break kicks in.

And so, despite Bishoo’s heroics with the ball, Australia have already gained a sizeable lead on this track and by the time the last wicket falls, they may have an even more threatening lead. Adam Voges has batted absolutely stunningly on a tricky pitch Not at one instance has he looked edgy or nervous. Has eclipsed Bishoo’s performance.

And that’s two from that over for Devendra Bishoo! First he gets Mitchell Johnson and then Mitchell Starc. Johnson looked to sweep it towards deep square leg but only got the top edge which was caught at square leg. Starc’s dismissal didn’t even involve a fielder, he was clean bowled. In the process Bishoo has taken a 6-for and also celebrates his careers fiftieth wicket.

OUT! Mitchell Starc b Bishoo

So that is lunch and though the session belonged to West Indies, Australia have taken a small lead and are still ahead in this match at this stage. West Indies will want to comeback and finish the tail off quick so as to have a shot at victory. Devendra Bishoo was the man of that session, but Adam Voges’ effort with the bat can’t be undermined.

Australia are crumbling to the leg spin of Devendra Bishoo! Brad Haddin is the latest to fall and he has been clean bowled! Bishoo pitched it on line of middle and leg and it spun to take the off-stump! Bishoo hasn’t shied from tossing it up and has reaped the rewards!

The West Indians have been brought right back in this game by Devendra Bishoo! He’s taken the second man in the day and this time has Shane Watson make the walk back to the pavillion! Australia in trouble here and another wicket here and it will be advantage West Indies. Watto was trying to counter-attack and went for a drive but the ball turned, he got an edge and he was caught at second slip!

Oh no, Steven Smith is out! The West Indians consistently bowled tight lines and built the pressure and were not giving anything away. Smith decided to counter-attack by taking on D Bishoo but has lost his wicket in the process for a quarter-century. Shane Watson is the new batsman in. Watto and Adam Voges will look to build a big partnership

Hello and welcome to CricketCountry’s live blog for first Test between West Indies and Australia at Dominica. I’m Rishad D’Souza and I will take you through the updates from the match on Day Two. The first day saw the bowlers dominate for most part of the game as 13 wickets tumbled. READ: Are we witnessing the rise of West Indies

The West Indians were bowled out for just under 150 in the first innings, with a score of 148. The pitch was difficult to bat on, but 148 could still be looked at as a very poor performance as plenty of the West Indian batsmen were guilty yet again of throwing the wickets away after getting good starts.

In return the Australians played each ball to its merit and were averse of playing unnecessary shots after realising that the pitch was difficult. The West Indian bowlers still did a fine job to pick three wickets for 85 runs at close of play and they’ll be eying early wickets on Day 2. 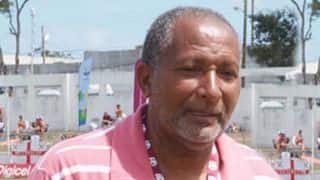