Veteran left-hander Shivnarine Chanderpaul fashioned his 28th Test century and climbed to eighth in the all-time list of run-scorers, while Chris Gayle posted his 15th Test hundred, as the West Indies took a vice-like grip on the second Test against Zimbabwe at Roseau on Thursday. 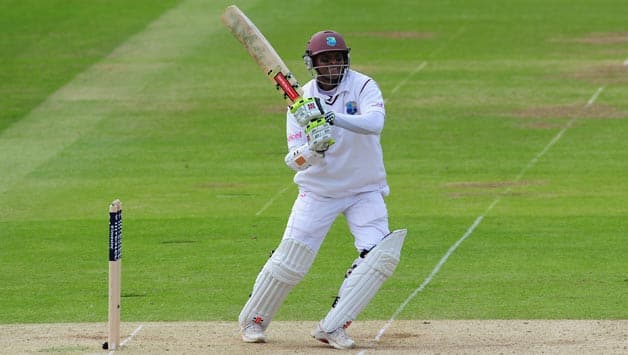 Veteran left-hander Shivnarine Chanderpaul fashioned his 28th Test century and climbed to eighth in the all-time list of run-scorers, while Chris Gayle posted his 15th Test hundred, as the West Indies took a vice-like grip on the second Test against Zimbabwe at Roseau on Thursday.

At the close of the second day at Windsor Park, the West Indies had reached an imposing 382 for eight, a lead of 206 runs heading into Friday’s third day.

The 38-year old Chanderpaul made 108, an innings that propelled him past Sri Lanka’s Mahela Jayawardene in the all-time list with 10,830 runs in his 149th Test.

He faced 284 balls and struck 13 fours, to record his second century at the venue and his first against the African side.

Gayle, meanwhile, struck 101 from 145 balls with 12 fours and one six, to record his second century against Zimbabwe.

Not to be left out, Denesh Ramdin helped himself to his tenth half-century in Tests, an attractive 86 that helped the West Indies assert control of the game in the post-lunch session.

Off-spinner Prosper Utseya, who came in for a hiding from Gayle in the first session, finished with three for 60 while seamer Kyle Jarvis (2 for 82) and leg-spinner Graeme Cremer (2 for 82) picked up two wickets apiece.

Resuming the day on 114 for two, the Windies had the worst possible start when Marlon Samuels was bowled off the first ball of the day for his overnight 26.

Gayle and Chanderpaul then steadied the innings with a 67-run, fourth wicket stand that pushed the Windies in sight of the 200-run mark.

The left-handed Gayle, resuming on 61, emerged from a cautious start to rip into the Zimbabwe bowling with a series of telling blows.

After quietly moving into the 80s, he suddenly exploded with a six over mid-wicket off medium pacer Hamilton Masakadza and then raced up to 99 with two consecutive sixes off Utseya.

A single to point off the next ball raised three figures for Gayle but he perished soon afterward as he failed to clear the ropes with Utseya, and was brilliantly held at long off by Jarvis, running around and diving.

Chanderpaul and Ramdin then killed off any hopes Zimbabwe may have harboured of remaining competitive, as they combined in a 173-run, fifth wicket partnership which consumed the post-lunch session.

Surviving two half-chances at bat-pad off Cremer, Chanderpaul remained composed and reached his landmark with a pull for a single to deep square leg off Jarvis.

Ramdin raised his half-century with a streaky shot for two to third man that also brought up the 100-run partnership.

When the new ball was taken, Ramdin greeted Jarvis with two thunderous off-side boundaries and seemed almost certain to reach his fourth Test century before he played back was plumb lbw to Cremer at 354 for five.

His dismissal triggered a slide as the Windies suddenly lost four wickets for 16 runs in the space of 42 deliveries.