Welcome to Cricketcountry's live coverage of the 1st of the five-match One-Day International (ODI) series between Zimbabwe and Afghanistan at the Queens Sports Club in Bulawayo.

Hello and welcome to Cricketcountry’s live coverage of the 1st of the five-match One-Day International (ODI) series between Zimbabwe and Afghanistan at the Queens Sports Club in Bulawayo. Zimbabwe, who are coming off a 2-1 series win against Ireland last week, are high on confidence and would like to continue the winning form and momentum in this very series against Afghanistan as well and would love to see this series win convincingly as well. Afghanistan, on the other hand, who had a tough outing in the 2015 ICC Cricket World Cup earlier this year, would like to give bthemselves a fresh start. Who will draw first blood in the opening game? Catch all the updates here. LIVE SCORECARD: Zimbabwe vs Afghanistan 2015, 1st ODI at Bulawayo

LIVE CRICKET SCORE: Zimbabwe 126/2 (Target: 123) | Overs 23.2 | Craig Ervine 20(25), Tinotenda Mutombodzi 18(11) | Zimbabwe complete an eight-wicket victory over Afghanistan to take a 1-0 lead in the five-match ODI series at the Queens Sports Club in Bulawayo on Friday. Chibhabha is dismissed shortly after getting to his half-century, but the job is pretty much done by then as Zimbabwe needed a mere 26 to win with a plenty of overs left. Mutombodzi and Ervine bulldozed their way towards the target in the end, with the former hitting the winning six off Samiullah Shenwari. OUT! Chamu Chibhabha c Najubullah Zadran b Amir Hamza 58(69)

LIVE CRICKET SCORE: Zimbabwe 95/1 (Target: 123) | Overs 20 | Chamu Chibhabha 57(67), Craig Ervine 9(19) | The chase is still going about comfortably, with opener Chamu Chibhabha getting to his fifty in his 62nd delivery with a six off Amir Hamza. It is Chibhabha’s 15th ODI fifty, as he now looks to finish the game for his team!

LIVE CRICKET SCORE: Zimbabwe 66/1 (Target: 123) | Overs 15 | Chamu Chibhabha 32(46), Craig Ervine 4(9) | Zimbabwe have lost the wicket of Richmond Mutumbami, who departs after scoring a near run-a-ball 30. Medium-pacer Aftab Alam takes the wicket, with the opening pair adding 53 before the fall of the dismissal. OUT! Richmond Mutumbami c Mohammad Shahzad b Aftab Alam 30(35)

LIVE CRICKET SCORE: Zimbabwe 43/0 (Target: 123) | Overs 10 | Richmond Mutumbami 22(31), Chamu Chibhabha 21(29) | The hosts have accelerated in the last five overs, and are currently waltzing towards their target with a sense of ease. Both the batsmen are batting in the 20s at the moment.

LIVE CRICKET SCORE: Zimbabwe 16/0 (Target: 123) | Overs 5 | Richmond Mutumbami 4(15), Chamu Chibhabha 12(15) | Zimbabwe are off to a sluggish start in their chase of the modest target, although Chibhabha and Mutumbami have scored three boundaries in their innings so far.

LIVE CRICKET SCORE: Afghanistan all wicket down at 122 playing 34.1 overs. TARGET: 123 for Zimbabwe.Looks like an easy total for an in form Zimbabwe team. Afghanistan need to do flawless bowling and fielding to defend their low total.

OUT! Najibullah Zadran b Chisoro 25 (31): Another big blow for Afghanistan. Chisoro takes a set Najibullah. Two wickets in 4 overs.

Najibullah needs to score some good runs to give the scorecard a boost. Afghanistan need to cross the 100 run mark.

LIVE CRICKET SCORE: Afghanistan 70/5 after 20 overs. BATTING : Samiullah Shenwari 17(32), Najibullah Zadran 9(17).The middle order has to prove their potential at this time for Afghanistan. Zimbabwe is in full control of the match having removed the top order.

OUT! Mohammad Nabi c Ervine b Masakadza 0 (1) Consecutive wickets for Masakdza as he takes a new Mohammad Nabi. Afghanistan look in danger.

OUT! Mohammad Shahzad lbw b Masakadza 23 (31).Another blow for Afghanistan. Wellington Masakdza breaks the building partnership.

LIVE CRICKET SCORE: Afghanistan 52/3. BATTING : Samiullah Shenwari 7(16), Mohammad Shahzad 17(29) :A new partnership is building between the two and this needs to be continued.

TOSS: Match referee Dev Govindjee was out in the middle with the skippers. Afghanistan won the toss and their captain Asghar Stanikzai elected to bat first.

After three tour matches, Zimbabwe take on Afghanistan in the first One-Day International (ODI) at the Queens Sports Club at Bulawayo. Afghanistan were dominant in the tour matches against a second-string Zimbabwe team and will hope that they can continue their run of form in the five-match ODI series as well. Newly-appointed Afghanistan coach Inzaman ul Haq would hope that his inputs have made a difference to the team and they can execute them in this match. Taking an early lead is always crucial in a series and both teams would not like to miss out on such an opportunity. 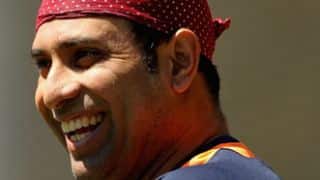 VVS Laxman set to star in a PETA campaign