Catch the live cricket scores and updates from the only T20I between Zimbabwe and New Zealand at Harare.

Welcome to CricketCountry’s live coverage of the only Twenty20 International (T20I) between Zimbabwe and New Zealand at Harare. After losing the opening game, Black Caps won the series 2-1 in a fine manner. This is Amit Banerjee and I will bring you live updates of the match as they happen. New Zealand were tested by Zimbabwe in all games except for the second One-Day International (ODI). Zimbabwe were very close to winning the series but will rue the soft dismissals that hampered their progress. Zimbabwe had won the game against India recently in the shortest format of the game and will be wanting to do the same against a New Zealand side devoid of the star players. Will they do it or will New Zealand continue their domination? Catch live cricket scores and updates of Zimbabwe vs New Zealand, only T20I at Harare here

Live Cricket Score Zimbabwe 118/8 | 20 overs; Chris Mpofu 6(3), Prosper Utseya 2(2): And New Zealand register a massive 80-run win in the one-off T20I! The visitors manage to get a wicket each in the last two overs, with Graeme Cremer and Craig Ervine departing for 5 and 42 respectively. Cremer was done in by a slower delivery by Grant Elliott! It was a Kiwi show all the way through! The batsmen, especially debutant George Worker, managed to utilise the flat pitch to their advantage. The Zimbabwean batsmen, on the other hand, fell victim mostly to rash shots as well as some disciplined bowling by the pacers. The hosts never looked to be in the game till the end. Read the match report by Ayush Gupta here.

Live Cricket Score Zimbabwe 101/6 | 18 overs; Craig Ervine 37(40), Graeme Cremer 5(6): Zimbabwe depart after Chakabva attempts a ramp off a short-pitched delivery, but losing out on room to execute the shot properly. Ends up sending the ball in the air towards the slips, where Ronchi dives to take a fine catch! The hosts have lost their sixth with 89 on board. Zimbabwe bring up their 100 at the end of 18 overs.

Live Cricket Score Zimbabwe 84/5 | 15 overs; Craig Ervine 29(36), Regis Chakabva 11(12): New Zealand skipper Kane Williamson brings McClenaghan back into the attack, with Ervine and Chakabva managing to steal a boundary or two every now and then. However, the hosts are far from the required rate presently.

Live Cricket Score Zimbabwe 64/5 | 12 overs; Craig Ervine 21(26), Regis Chakabva 0(1): Williams and Ervine somewhat stabilise the Zimbabwe innings in the middle overs, before Ish Sodhi takes a brilliant one-handed catch to dismiss Sean Williams for 16 off 15 balls. Zimbabwe have now lost half of their side with 64 runs on the board.

Live Cricket Score Zimbabwe 46/4 | 9 overs; Craig Ervine 12(18), Sean Williams 7(8): OUT! The Zimbabwe skipper skies the final ball of the seventh over towards long-on, not getting enough bat to clear the ropes as Jimmy Neesham takes a good catch to dismiss Chigumbura for 2. The hosts are in all sorts of trouble at the moment.

Live Cricket Score Zimbabwe 28/3 | 6 overs; Craig Ervine 4(9), Elton Chigumbura 1(1): Chamu Chibhabha is bowled off a slower delivery by Jimmy Neesham off the first ball of the fourth over, as Zimbabwe are in deep trouble at the moment. Fails to get any bat to the delivery whatsoever! Sikandar Raza, Zimbabwe’s new-found batting gem walks out to hopefully rescue his side out of the situation. Raza sends the fifth ball of the fourth over down towards long-on for a boundary! Milne however, is hostile in the next over with short-pitched deliveries, one of which goes on to hit Ervine on the back of his helmet. Raza gets an edge off McClenaghan off the third ball of the sixth over, with the fielder at short-third man making a misfield to allow the ball to run towards the boundary. Raza attempts a similar shot off the next delivery, but edges the ball to the wicketkeeper this time.

Live Cricket Score Zimbabwe 12/1 | 3 overs; Chamu Chibhabha 6(5), Craig Ervine 0(3): The hosts get their first boundary of their innings when Chibhabha smashes McClenaghan over extra-cover for a boundary. Masakadza dishes out a similar treatment to Milne in the next over, before edging a rising delivery to wicketkeeper Ronchi to depart for 6 off 9 balls, as Zimbabwe lose their first wicket with 12 on board. Ervine arrives at the crease, and edges the first ball to Ronchi, only for the keeper to make a mess of the opportunity to grant the batsman a second life.

Live Cricket Score New Zealand 198/5 | 20 overs; Colin Munro 23(11), Nathan McCullum 18(7): Muzarabani comes in to bowl the 19th over, which goes on quietly until Munro decides to smash two straight fours to end the over! Nathan McCullum sends the first ball of the final over down the leg-side off an inside edge, before smashing a full toss of the next ball over long-on for a massive six! In the end, the sixth wicket pair collect 16 runs off the final over to finish two short of 200. Read the New Zealand innings report here.

Live Cricket Score New Zealand 169/5 | 18 overs; Colin Munro 11(5), Nathan McCullum 1(1): Ronchi brings up the 150 for New Zealand with a four followed by a six! 15 runs have been scored off the 17th over, with Ronchi now crucial for the Black Caps to finish on a massive total. That is not to happen however, as he is caught superbly by Craig Ervine at deep backward square-leg off the bowling of Sean Williams to depart for 29 off 19 balls. Munro ends the 18th over with a four, followed by a six!

Live Cricket Score New Zealand 142/4 | 18 overs; Luke Ronchi 29(17), Colin Munro 0(2): Seven runs have been scored off the second ball of the 15th over. Worker plays the delivery through cover to take three runs, before a bad throw by wicketkeeper Chakabva for four overthrows. One of the rare instances in international cricket! BOWLED! Worker’s entertaining debut innings comes to an end in the following over as he comes down the track in order to smash Williams, but misses the line completely as the ball hits the middle and leg stumps!

Live Cricket Score New Zealand 126/3 | 14 overs, George Worker 52(34), Luke Ronchi 7(4): FIFTY FOR GEORGE WORKER! The New Zealand debutant brings up the milestone on debut, consuming only 33 balls to reach the mark. Worker has smashed three fours and four sixes during his stay at the crease, and he is single-handedly tearing the opposition apart. Ronchi hits his first boundary of the innings later in the over, as 14 runs come off it.

Live Cricket Score New Zealand 97/3 | 12 overs, George Worker 30(26), Luke Ronchi 1(1): Grant Elliott gets caught by Hamilton Masakadza at long-on while trying to clear the boundary off the bowling of Graeme Cremer. New Zealand lose their third wicket with 93 runs on board.

Live Cricket Score New Zealand 87/2 | 10 overs, George Worker 26(21), Grant Elliott 4(3): OUT! Guptill falls after a 24-ball 33, which included five boundaries. Comes down the track in order to smash Williams over long-off, but doesn’t get enough bat to the shot as the ball lands safely in the hands of Raza, who was stationed there. Grant Elliott comes down to bat in his place. Cremer is introduced into the attack in the next over, and gets smashed over mid-wicket for a massive hit into the grassbanks by Worker.

Live Cricket Score New Zealand 73/1 | 8 overs, Martin Guptill 32(22), George Worker 17(14): 50 up for New Zealand in the over. George Worker collects his first international runs with a leg-glance than results in a boundary. Guptill then pulls off the first ball of the next over, bowled by Chibhabha, to move into the 30s. SIX! Worker smashes the fifth delivery towards backward square leg, with the ball clearing the boundary rope! Ends the over with a boundary, with 17 runs coming off the over.

Live Cricket Score New Zealand 49/1 | 6 overs, Martin Guptill 25(18), George Worker 0(6): Guptill pulls the first delivery of the fifth over towards deep square-leg for a four! Seven runs are scored off the fifth over, with Worker facing his first ball in international cricket at the end of the over.  Four leg-byes off the next over as the ball grazes past Guptill’s pads down the leg side towards the boundary.

Live Cricket Score New Zealand 37/1 | 4 overs, Martin Guptill 16(11), George Worker 0(0): OUT! The dangerous Kane Williamson has been nipped in the bud by Zimbabwe before he could cause any further damage to the hosts. Craig Ervine takes a brilliant catch at deep square after Williamson attempts an ambitious heave off the bowling of Muzarabani. Guptill makes up for the loss with a couple of boundaries later in the innings.

Live Cricket Score New Zealand 25/0 | 2 overs, Martin Guptill 6(4), Kane Williamson 19(8): Muzarabani comes in to bowl the next over. Dot off the first ball, before Guptill smashes the second delivery over mid-off to score his boundary of the innings. Williamson cuts through point in the fourth delivery for the second four of the over! 10 runs are scored in the second over, as the Black Caps are off to a good start.

Live Cricket Score New Zealand 15/0 | 1 overs, Martin Guptill 1(1), Kane Williamson 14(5): Utseya to bowl the first over. Guptill takes a single off the first ball of the over, before Williamson hits three consecutive boundaries off the last three balls to get New Zealand off to a flying start.

Toss: Zimbabwe have won the toss, and they will bowl first.

Zimbabwe and New Zealand will want to finish the tour on a positive note after playing a good ODI series. Zimbabwe had their moments in the series but failed to win those and eventually lost the series 1-2. New Zealand on the other hand, came back superbly after losing the first game to the hosts. They will want to continue their impressive run. Read: Zimbabwe vs New Zealand 2015, one-off T20I at Harare, Preview 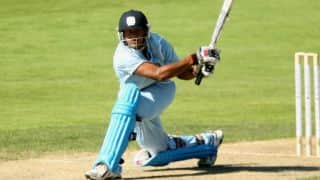 Mayank Agarwal, Unmukt Chand score fifties, set India A on course for a win against South Africa A at Chennai