Catch the live scores and updates of Zimbabwe vs Pakistan 2015, 1st T20I at Harare.

Welcome to CricketCountry’s live coverage of the first Twenty20 International (T20I) between hosts Zimbabwe and their visitors Pakistan at Harare. The tour kicks off with the first of two T20Is, which will be followed by three One-Day Internationals (ODIs). Zimbabwe had recently toured Pakistan, becoming the first team to do so since the attacks on the Sri Lankan team bus in 2009. Zimbabwe lost both T20Is and all three ODIs, but had managed to give an excellent account of themselves despite the losses. They then hosted India and New Zealand, and managed to win a couple of matches against them but still lost the series. They will be confident of pulling off a few upsets again. Meanwhile, Pakistan are on a roll after having beaten Sri Lanka in their own backyard and will want to pull off another overseas series win, this time against Zimbabwe. Catch live cricket scorecard and ball-by-ball updates of Zimbabwe vs Pakistan 2015, 1st T20I at Harare

Live Cricket Score: Zimbabwe 123/9 | Overs 20 | BATSMEN: Prosper Utseya 12 (11), Tinashe Panyangara 1 (3): Excellent death bowling by Wahab Riaz, Sohail Tanvir and Imran Khan Jr have given Pakistan a 1-0 lead in the two-match series. A well deserved victory Pakistan by a margin of 13 runs. For Zimbabwe skipper Chigumbura tried a bit but his efforts were not enough for his team.

Live Cricket Score: Zimbabwe 87/6 | Overs 15 | BATSMEN: Elton Chigumbura 10 (14), Luke Jongwe 1 (5) | GONE! Mutumbami has been run out by Imad Wasim who has a direct shy at the stumps while the batsmen were on for a single and was absolutely bang on target. He goes for mere nine as Luke Jongwe comes in. OUT! Richmond Mutumbami run out 9 (9)

Live Cricket Score: Zimbabwe 77/5 | Overs 13 | BATSMEN: Elton Chigumbura 1(8), Richmond Mutumbami 9(8) | Elton Chigumbura has not been able to get going at all. GONE! Imad Wasim just cannot be kept out of this game! He snares Sean Williams as well, that’s his fourth wicket! Richmond Mutumbami is the new man in. OUT! Sean Williams 14(11) LBW Imad Wasim

Live Cricket Score: Zimbabwe 50/3 | Overs 8 | BATSMEN: Hamilton Masakdza 22(21), Sean Williams 1(1) | Imad Wasim continues with his left-arm spin. GONE! Sikandar is out LBW! And he probably would have been out stumped as well. Zimbabwe beginning to unravel here. Pakistan right on top! Sean Williams in at No. 5. OUT! Sikandar Raza 13(10) LBW Imad Wasim

Live Cricket Score: Zimbabwe 37/2 | Overs 6 | BATSMEN: Hamilton Masakdza 13(15), Sikandar Raza 10(5) | Imran Khan Jr bowls an over full of slower balls and goes for nine runs off the over. Sohail Tanvir comes on again. GONE! LBW first ball, it was a tough call though. Ervine is back in the hut and Sikandar Raza comes in. OUT! Craig Ervine 10(11) LBW Sohail Tanvir

Live Cricket Score: Zimbabwe 18/1 | Overs 4 | BATSMEN: Hamilton Masakdza 6(11), Craig Ervine 10(11) | Sohail Tanvir and Wahab Riaz are bowling really well. Masakadza and Ervine have not been able to get too many runs. Neither man have managed to go at over a run-a-ball. Imran Khan (the newest one) comes on now. Yet another left-arm seamer, the third to bowl for Pakistan in this innings, on debut.

Live Cricket Score: Zimbabwe 3/1 | Overs 2 | BATSMEN: Hamilton Masakdza 2(7), Craig Ervine 1(3) | Imad Wasim opens bowling. OH HE STRIKES! Chibabha took three wickets but he fails with the bat! Out for a duck, bowled by Imad. In comes Craig Ervine to join Hamilton Masakadza. Sohail Tanvir from the other end. Good over. OUT! Chamu Chibabha 0(2) b Imad Wasim

Catch the innings report here: Shoaib Malik and Mohammad Rizwan propel Pakistan to 136 against Zimbabwe in 1st T20I at Harare

Live Cricket Score: Pakistan 136/8 | Overs 20 | BATSMEN: Mohammad Rizwan 33(31) | Just a couple of overs to go before now. Luke Jongwe comes on to bowl it. Good over, he is bowling a lot of slower balls and keeping the runs down. GONE! Imad Wasim just slogs blindly and gets an outside edge to short third man. Out walks Shahid Afridi, finally. Slog and miss first ball. Makes connection with his next ball, but down to just two. Last two balls of the innings. Where will Afridi go? OUT! He has to walk back, nowhere near the middle of the bat there. Terrific catch from Chamu Chibabha in the deep. Final ball of the innings. Wahab swings and misses, and run out trying to take a bye! OUT! Imad Wasim 19(12) c Craig Ervine b Luke Jongwe, Shahid Afridi 2(3) c Chamu Chibabha b Tinashe Panyangara, Wahab Riaz 0(1) run out Richmond Mutumbami

Live Cricket Score: Pakistan 127/5 | Overs 18 | BATSMEN: Mohammad Rizwan 30(26), Imad Wasim 17(8) | Imad Wasim and Rizwan aren’t quite hitting the bowling out of the park here. Jeez, where’s Afridi when you need him? Williams bowling quite beautifully at the moment. Imad finally manages to get one away, hits Williams over the ropes at long on. Follows up with another boundary in the same area.

Live Cricket Score: Pakistan 91/5 | Overs 15 | BATSMEN: Mohammad Rizwan 11(14), Imad Wasim 1(2) | Malik has been joined by the young Mohammad Rizwan. Lots to play for here. Rizwan is taking it easy, but Malik is batting beautifully at the moment. OH GONE! Sean Williams strikes, Malik is bowled. And he is absolutely furious with himself! Imad Wasim makes his way in at No. 7. Where is Lala? OUT! Shoaib Malik 35(24) b Sean Williams

Live Cricket Score: Pakistan 73/4 | Overs 12 | BATSMEN: Shoaib Malik 27(18), Mohammad Rizwan 2(4) | Shoaib Malik is starting to turn it on now! Hits Graeme Creamer for a big six! Sean Williams comes into the attack. Tidy over, just four runs off it. Creamer continues from the other end. GONE! Akmal looks to go over long on, he picks out Hamilton Masakadza instead! OUT! Umar Akmal 14(17) c Hamilton Masakadza b Graeme Creamer

Live Cricket Score: Pakistan 56/3 | Overs 9 | BATSMEN: Shoaib Malik 17(12), Umar Akmal 12(9) | Prosper Utseya and Graeme Creamer bowling in tandem now. The pressure is palpable on the Pakistan batsmen at the moment. Malik and Umar are vastly experienced so they will be the ones who will need to ensure Pakistan get to a substantial total.

Live Cricket Score: Pakistan 33/3 | Overs 6 | BATSMEN: Shoaib Malik 0(0), Umar Akmal 4(3) | Pakistan are in a spot of bother after losing those two quick wickets. Sohaib and Shoaib are the two batsmen out there right now. OUT! Can you believe it, Chamu Chibhabha is ripping out the Pakistan batting! Umar Akmal walks out now. FOUR! Lovely shot to get off the mark. Akmal starts off well. OUT! Sohaib Maqsood 6(10) b Chamu Chibabha

Live Cricket Score: Pakistan 25/2 | Overs 4 | BATSMEN: Sohaib Maqsood 3(1) | Tinashe Panyangara comes on now. Shehzad on strike. Bit of a delay here, with the sight screen. We resume. Shehzad hogs the strike, Mukhtar doesn’t get to face a single ball in that over. Chibhabha continues. OUT! Cleaned him up, Shehzad is bowled! Maqsood is the new man. Good shot, gets off the mark with three. OUT! That’s another one, this time Mukhtar, who was off strike for so long, has holed out! OUT! Ahmed Shehzad 17(19) b Chamu Chibabha, Mukhtar Ahmed 4(4) c Hamilton Masakadza b Chamu Chibabha

Live Cricket Score: Pakistan 16/0 | Overs 2 | BATSMEN: Ahmed Shehzad 12(9), Mukhtar Ahmed 4(3) | Chamu Chibhabha from the other end now. ONE played to third man, Mukhtar is off the mark. ONE. Shehzad clips it away off his pads. TWO. Played to backward point for another couple. FOUR! Good shot from Shehzad, crashes through covers. ONE. Quick single to mid on.

TOSS: Pakistan have won the toss and elect to bat first. Imran Khan Jr (no, not the 1992 World Cup winning captain, nor the bloke who played against Australia in UAE recently) makes his debut. The rate at which Pakistan are churning out pace-bowling Imran Khans is ridiculous!

The visitors will bank on their eclectic mix of youth and experience in the form of the explosive Mukhtar Ahmed and Mohammad Hafeez at the top. Mukhtar recently broke a T20 record for Pakistan with an explosive century, and will be looking forward to feast on an attack that lacks the firepower to keep quality batsmen in check. Meanwhile, the old hands like Shahid Afridi himself, Shoaib Malik, and Umar Akmal will be keen on getting some runs as well. As for the hosts, Hamilton Masakadza and Elton Chigumbura will remain their most vital batsmen. Pakistan start as firm favourites but Zimbabwe should not be taken lightly. Zimbabwe vs Pakistan 2015, 1st T20I at Harare preview

Gayle on a shoot, funky as ever! 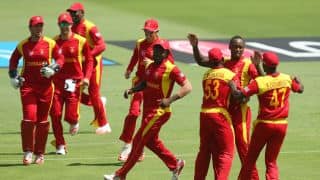