Afghanistan face off against Zimbabwe in the third of the five-match ODI series at Sharjah.

Hosts Afghanistan face off against visitors Zimbabwe in the third of the five-match One-Day International (ODI) series at the Sharjah Cricket Association Stadium on Saturday. Afghanistan are on top form, especially after winning their maiden ODI series against Zimbabwe in the return series a couple of monts back and they continue to prove their dominance in this series as well, as they currently lead the series by 2-0 and would aim to seal it with an unassailable 3-0 lead. However, Zimbabwe would aim for a turnaaround as they look to win this thie tie and stay alive in the series until Monday. LIVE CRICKET SCORECARD: Afghanistan vs Zimbabwe, 3rd ODI at Sharjah

Afghanistan are most likely to stick to the winning combination. While Zimbabwe, would again be making a couple of changes to get their combinations right, especially in the bowling department this time. Wellington Masakadza being the most expensive bowler in the previous game is likely to be dropped and could well be replaced by either of Chamu Chibhabha, Tendai Chisoro or Tinashe Panyangara. It could also be the same for Taurai Muzarabani, who was the second most expensive bowler, but judging him based on just a game would be a bit harsh and could likely be given anther chance to prove his worth. LIVE CRICKET UPDATES: Afghanistan vs Zimbabwe, 3rd ODI at Sharjah

With the game being played at the same venue, it would again be interesting to see how the teams set their combination, as the wicket has behaved differently in both the games, thus clearly making the track unpredictable. BA well balanced side will eventually come out on top. Afghanistan vs Zimbabwe 2015-16, 3rd ODI at Sharjah: Preview 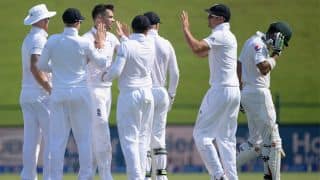