Catch the live cricket scorecard of the second ODI match between Bangladesh and South Africa at Dhaka here.

Bangladesh need to put up an inspiring show in the second One-Day International (ODI) against South Africa on Sunday at Dhaka. Bangladesh are 0-1 down in the three-match series, and a win will keep them alive in the series.  Bangladesh have been let down by their batsmen collectively. Even though their bowlers have not been much impact, the batsmen have not put up a show in any way through out the Twenty20 International series and first ODI. LIVE SCORECARD: Bangladesh vs South Africa 2015, 2nd ODI at Dhaka

For South Africa, a risk in the name of Kagiso Rabada worked out well for them. Making his ODI debut, Rabada not only finished with six wickets, the best ever one-day haul by a debutant, but registered a hat-trick as Bangladesh were folded cheaply inside 36.3 overs after the hosts opted to bat first on a rain-soaked pitch at the Sher-e-Bangla National Stadium. LIVE CRICKET UPDATES: Bangladesh vs South Africa 2015, 2nd ODI at Dhaka

Rabada, selected ahead of experienced Morne Morkel, struck in the third ball of his second over when he sent the off-stump of opener Tamim Iqbal cartwheeling. He then made one-down Litton Das offer a low catch to Farhaan Behardien at midwicket and trapped Mahmudullah leg-before in his next two deliveries to complete the hat-trick, joining Bangladesh’s Taijul Islam, who achieved the feat against Zimbabwe at the same ground in December. The 20-year-old pacer later dismissed other opener Soumya Sarkar before Shakib Al Hasan and Mushfiqur Rahim provided a brief resistance for Bangladesh with 53-run fifth wicket stand. LIVE CRICKET STREAMING: Bangladesh vs South Africa 2015, 2nd ODI at Dhaka 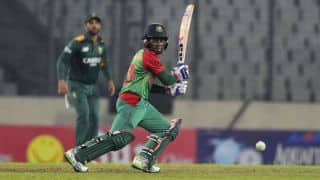 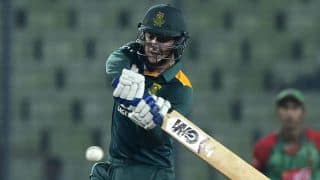