Catch the live scorecard for the second Twenty20 International (T20I) between Bangladesh and South Africa here.

Bangladesh take on South Africa in the second T20I match at Dhaka. South Africa won the first T20I at the same venue by 52 runs, riding on Faf du Plessis’s half-century. Despite being on high, Bangladesh is facing their first series defeat at home in the last two months. Live Cricket Blog: Bangladesh vs South Africa 2015, 2nd T20I at Dhaka

The chase, however, was on track with the hosts on 50 for 2 at one stage in the first T20I with Shakib Al Hasan and Mushfiqur Rahim going well. Mushfiqur’s departure started the slide as Sabbir Rahman and Nasir Hossain failed to stay with Shakib, who walked back himself under the weight of the climbing required rate. Only three of their batsmen reached two-digit scores as the hosts lost their last eight wickets for 48 runs and folded up for their lowest total at home. Live scorecard: Bangladesh vs South Africa, 2nd T20I at Dhaka

Mashrafe Mortaza asked his teammates to play according to the situation in the next match at the same venue on Tuesday. When Sabbir went to the crease, we needed around 7-8 runs per over and nearly nine when Nasir went in. So they wanted to score off bad balls. But they tried to play too many shots,” said the fast bowler. “As we have been successful playing aggressively, it is natural to not want to change the style of play. But playing according to situation, too, is necessary. I hope the batsmen will be a bit thoughtful in such situations in future.” READ: Bangladesh vs South Africa 2nd T20I at Dhaka Preview 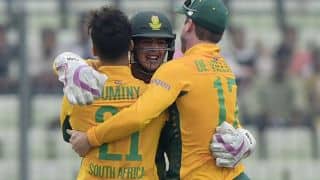