Bangladesh will want to win the second match against Zimbabwe to gain an unbeatable lead of 2-0.

Zimbabwe will look to equal the four match Twenty20 (T20) series when they take on Bangladesh in the second match of the series at Khulna. Zimbabwe in the first match had set Bangladesh a target of 163 to win in 20 overs with some big hitting from Hamilton Masakadza and Vusi Sibanda. Masakadza and Sibanda added 101 runs for the first wicket in 12 overs. Bangladesh did manage to pull the strings on the run-rate as Al Amin Hossain and Mustafizur Rahman struck twice to maintain a par score for them to chase. Masakadza was the highest run for the visitors making 79 valuable runs. Live Cricket Scorecard: Bangladesh vs Zimbabwe 2015-16, 2nd T20I at Khulna

In reply Bangladesh started quick with their openers getting 31 runs in the first few overs only. Sabbir Rahman managed to make quite to small but important partnerships with Tamim Iqbal first and then Mushfiqur Rahim. Sabbir and Rahim added together 44 runs for the fourth wicket. Zimbabwe struck back with successive three wickets with only Shakib Al Hasan leading the batsmen charge. Shakib was joined by Nurul Hasan and got the hosts’ past 163. Shakib and Nurul managed to make a 29* unbeaten stand in just 1.5 overs.

Second match of the series promises to be another close affair, with Zimbabwe looking to win their first match at Bangladeshi soil in the new year. Bangladesh on the other land will want to continue their unbeaten form from last year. With only two match after this, the team which wins the second match will have a psychological advantage over the other team. 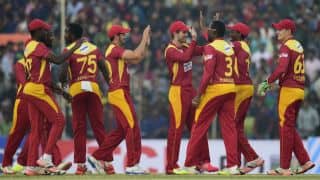