England will hope to build up a huge first-innings lead when they resume at 133 for 3 on the second day of the third Ashes 2015 Test.

England will hope to build up a huge first-innings lead when they resume at 133 for 3 on the second day of the third Ashes 2015 Test at Edgbaston on Thursday. Australia were bowled out for 136 as James Anderson bagged six for 47 — the best bowling figures for him in the Ashes history. Australia had the lone fighter in Chris Rogers, who scored a fine half-century. Australia were able to expose the England’s top-order frailties once again on the rain-affected first day, as Adam Lyth and Alastair Cook failed to convert starts into big scores. It was due to the half-century from Ian Bell that England were able to reach closer to Australia’s poor first innings’ score. Catch live cricket scores and updates of England vs Australia 3rd Ashes 2015 Test at Edgbaston, Day 2 here

England will hope that their young guns Joe Root and Jonny Bairstow play out the entire first session on the second day, so that they take lead and also continue to dominate Australia. Live Cricket Score England vs Australia, The Ashes 2015, 3rd Test at Edgbaston, Day 2

For the tourists, there will be high hopes on the spinner Nathan Lyon, who claimed the wickets of Cook and Bell to bring back Australia some smile. ALSO READ: James Anderson shows pace and bounce is not the only way to take wickets

However, it will be a massive challenge for the Australians to bounce back after the horror they had on Day One. Their batsmen, particularly Michael Clarke and Adam Voges continued to flop which exposed their weak lower order and England banked on the opportunity. It was Anderson’s day at last in the Ashes 2015. ALSO READ: Michael Clarke’s captaincy in Ashes 2015 lacks flexibility 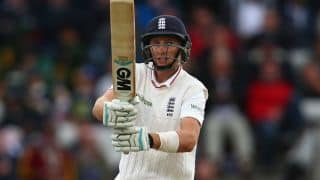