Catch the live scorecard and commentary of the final day of the fourth Test.

Australia and India clash on the fifth day of the fourth and final Test at the Sydney Cricket Ground on Saturday. The fourth day ended with Australia batting on a score of 251 for six, with Brad Haddin and Ryan Harris unbeaten on scores of 31 and zero. The hosts managed to extend their lead to 348, after bowling India out for 475 earlier in the day. Live Scorecard: India vs Australia 4th Test Day 5 at Sydney

The day began with India resuming from their overnight score of 342 for five. Virat Kohli, who had brought up his fourth century of the series on the previous day, was dismissed shortly after resuming his innings, departing on a score of 147 after offering a simple catch to Chris Rogers at short mid-wicket. Ravichandran Ashwin and Bhuvneshwar Kumar thwarted the Australian attack for sometime, with the former scoring his fourth Test fifty. India were eventually dismissed 97 runs short of the Australian first innings score.

Australia were handed an early blow as David Warner was dismissed by Ashwin on four. Rogers managed to bring up his sixth consecutive half-century to guide Australia to 126 for two, before the Indian bowlers managed to stage a comeback to reduce Australia to 165 for five. Joe Burns teamed up with Haddin to add 86 runs for the sixth wicket in just 52 deliveries. Burns scored the third-fastest fifty ever by an Australian batsman as he took just 33 deliveries. Burns was eventually dismissed on a score of 66 from 39 balls, smashing eight fours and three sixes during his whirlwind knock, as the umpires called for stumps. 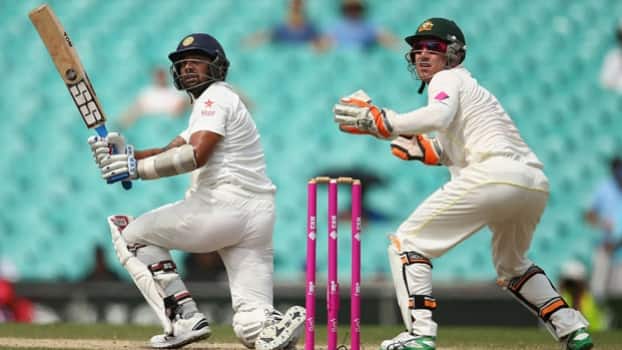