Coming off a 4-1 series win, Australia will hold the psychological edge over India.

India will take on Australia in the first Twenty20 International (T20I) at the Adelaide Oval. Having lost the One-Day International (ODI) series by a pathetic 4-1 margin, India will seek to draw first blood in the T20I leg of the series. This will be the first of three T20I games and performances of the players will definitely have some bearing on the selections for the approaching ICC World T20 2016. Australia have the psychological and home advantage over India and will look to extend their winning momentum. India’s chances in the T20Is rest on the bowlers. FULL CRICKET SCORECARD: India vs Australia 2015-16, 1st T20I at Adelaide

The ODI series was actually far more even contested than the scoreline leads one to believe. India were competitive in all the four games they lost and their batsmen were really good but the bowlers let them down on each occasion. India will hope for drastic improvements in that area. The return of the likes of Harbhajan Singh and Ashish Nehra will infuse some experience into the attack.

Australia’s bowling was not up to the mark either and their aim will be to get their act together. Guys like Scott Boland and James Faulkner were not as impactful as they would like to be. They will want to perform better. The batting on both sides has been good and on a typically true batting track at Adelaide one can expect a flurry of boundaries given the form batsmen are on either side. 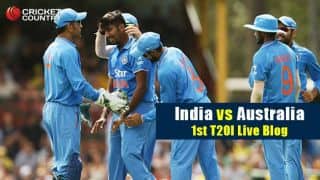