India have secured a commanding 403-run lead against South Africa in fourth Test.

India resume Day Four in a commanding position against South Africa as Virat Kohli and Ajinkya Rahane have extended their side’s lead beyond 400 runs and will look to score some quick runs before declaring. Kohli is batting on 83, whereas Rahane is not out on 52. India were 190 for 4 at stumos on Day Three.  Rahane had scored an excellent century in the first innings and has carried his form into the second innings as well. Kohli looked good in the first innings and also got off to a good start, but was unable to convert, something he will look to do in this innings. South Africa have found it tough in this Test and the entire series as well. FULL CRICKET SCORECARD: India vs South Africa 2015, 4th Test at Delhi

Morne Morkel was the most impressive with the ball for the visitors, picking up three wickets in the day. He first dismissed Murali Vijay before lunch on Day Three. Then followed them up with wickets of Rohit Sharma and Shikhar Dhawan. South Africa will have to dismiss India early and ensure they do not have many runs to chase down. They will have t chase down a world record score, if they want to get a consolation win in this series. South African batsmen have struggled throughout this series and it will not be much of a surprise if they struggle once again in their second innings. READ: Virat Kohli, Ajinkya Rahane put India in commanding position vs South Africa in 4th Test at Delhi

On Day One, India won the toss and elected to bat first. India made 334 in the first innings, with Rahane scoring 127. Ravichandran Ashwin made a handy 56 batting lower down the order. Kyle Abbott picked up five wickets and off-spiner Dane Piedt picked up four. South Africa were bowled out for 121, therefore conceding a 213-run first innings lead. India lead the series 2-0. 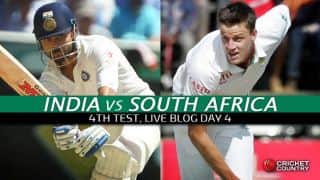