Thanks to Cheteshwar Pujara, India have bought themselves back into the contest.

Courtesy a responsible, unbeaten 135 from Cheteshwar Pujara, and a half-century from Amit Mishra, India reached a respectable 292 for 8 at stumps on Day Two. The rain came heavily with less than an hour to go before the scheduled close of play, and although it ceased after ten minutes, the wet outfield forced the umpires to call stumps, with about 35 minutes of lay still left. Sri Lanka had the upper hand in the contest for about three quarters of the day, but the eighth wicket partnership between Pujara and Mishra, of 104 runs, helped tilted it towards India. LIVE CRICKET SCORECARD: India vs Sri Lanka, 3rd Test, Colombo, Day 3

The day began with Pujara and Virat Kohli resuming batting with their team on 50 for 2, but Kohli soon departed, edging Angelo Mathews behind for 18. Rohit Sharma lookd good at the crease for the time he was in, even stroking an attractive four through a packed off-side field off potent leg-spinner Rangana Herath. Just when it looked Pujara and Rohit were in for the long haul, Rohit nicked Prasad behind at the stroke of lunch. LIVE CRICKET UPDATES: India vs Sri Lanka, 3rd Test, Colombo, Day 3

On resumption, Stuart Binny, the next man in, was rapped on the pads by an inswinging ball from Prasad, and was adjudged leg before wickewt. Naman Ojha, the wicketkeeper, who was making his debut, played some attractive strokes alongside Pujara, but after piling on 55 runs with him, Ojha slogged off-spinner Tharindu Kaushal straight to long-on. Ravichandran Ashwin did not last long, undone by the quality of Prasad’s bowling, but India found a saviour in Mishra. Although Mishra looked to attack from the beginning of his stay at the crease, his method worked out well, as Pujara also opened up. After a 104-run stand between the two, Mishra was stumped for 59. By then, India had recovered nicely. 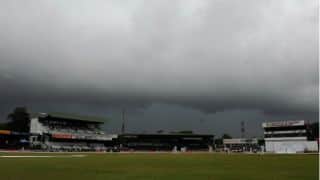