The Indian team take on Zimbabwe in the first Twenty20 International (T20I) at Harare.

The Indian team take on Zimbabwe in the first Twenty20 International (T20I) at Harare after whitewashing the three-match One-Day International (ODI) series. Especially, after winning the last two ODIs with a huge margin of 62 and 83 respectively, this young team India led by the 27-year old Ajinkya Rahane will enter the T20s with a confident mind-set. However, the men in blue might miss Ambati Rayudu, whose 165 runs off two games put him on the top of the batting table. He has flown back home due to an injury and has been replaced by another young talent, Sanju Samson. LIVE SCORECARD: India vs Zimbabwe 2015, 1st T20 at Harare

However, the recent suspension news regarding Indian Premier League (IPL) teams Rajasthan Royals (RR) and Chenai Super Kings (CSK) can become the unwanted distraction for a couple of players. Although there are no CSK players in the current squad that has toured to Zimbabwe, three crucial players—Rahane, Samson and Stuart Binny—belong to RR. LIVE UPDATES: India vs Zimbabwe 2015, 1st T20 at Harare

In a recent interview with the CricInfo, skipper Rahane cleared that IPL-related issues will not be his first priority at the moment.

“My only focus is on these two T20s, I’m not thinking about the IPL. If you represent your country, your only aim is to give your best for your country and win matches for them. We haven’t discussed anything [about the IPL]. We were completely focused on the third ODI that day, and with the T20s we’ll just focus on the game. We want to give our best against Zimbabwe and win both games,” the RR opener said. PREVIEW: India vs Zimbabwe 2015, 1st T20 at Harare

Meanwhile, the hosts have to figure out after losing poorly in the second and the third ODIs. The team began the series well, when they went as close as a four-run defeat in the first game of the series. Opener Chamu Chibhabha, who scored 72 and 82 in the second and third ODI respectively, will have to repeat his good innings in order to set the foundation for his developing team. 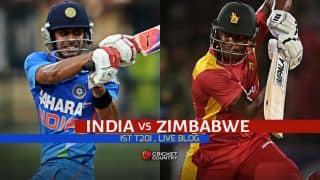