India and Zimbabwe face off in the second Twenty20 International (T20I) at the Harare Sports Club in Harare on Sunday. India are currently leading the two-match series 1-0 after winning the first match by a comfortable margin of 54 runs. The hosts, on the other hand, are yet to win a match in the tour so far, having lost the One-Day International (ODI) series 0-3 earlier. Skipper Ajinkya Rahane, who is captaining the Indian team for the ongoing tour, has won the toss in all the matches so far, and will look win the toss again, though he might want to field this time for a change. LIVE SCORECARD: India vs Zimbabwe, 2nd T20I at Harare

The visitors will have very little homework to do after putting up an impressive show both with the bat and ball so far. But the hosts will look to win a match and redeem some of their bruised pride. India fielded five debutants Akshar Patel, Manish Pandey, Kedar Jadav, Sandip Sharma and Stuart Binny for the T20 match on Friday. Patel made his T20 debut memorable, winning the man of the match award after picking up three wickets giving away just 17 runs. LIVE UPDATES: India vs Zimbabwe, 2nd T20I at Harare

He was given ample support by veteran off-spinner Harbhajan Singh (2 for 29) after experienced batsman-wicketkeeper Robin Uthappa played a responsible 35-ball 39-run knock to guide India to 178 for five. Set a target of 179, Zimbabwe could muster only 124 for seven, undone by the slow bowling pair of Patel and Harbhajan. 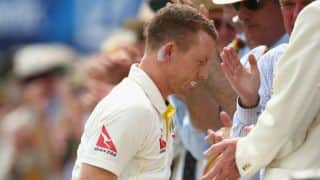