Catch the live scorecard of the third game of the IPL 2015.

Kings XI Punjab (KXIP) are hosting Rajasthan Royals (RR) for their first match of the Indian Premier League (IPL) 2015 at at the Maharashtra Cricket Association Stadium in Pune. This is the third game of the tournament. The tournament began with Kolkata Knight Riders (KKR) defeating Mumbai Indians (MI). Chennai Super Kings (CSK) defeated Delhi Daredevils (DD) to start their season with a win as well. KXIP will hope for a similar start to their campaign.  Live Cricket Scorecard: Kings XI Punjab vs Rajasthan Royals

KXIP have a side full of explosive batsmen and they will want them to come good. In Virender Sehwag and Murali Vijay they now also have a good combination at the top. The middle order is their strength where Manan Vohra, Glenn Maxwell and David Miller rack up the scores with aggressive batting. Mitchell Johnson will be expected to lead the bowling which looks a bit weak. Axar Patel is the lone spinner for them who has played before and done well.

RR have Shane Watson as their captain. Both he and Steven Smith had a good ICC Cricket World Cup 2015 and will want to emulate the good performances in IPL. James Faulkner, the Man of the Match in the World Cup 2015 final is going to be very vital for them in the tournament. They have good overseas options despite Kane Richardson pulling out of IPL before. Either of Tim Southee, Chris Morris may get a game against KXIP who have a strong batting order. Expect a tight contest! Kings XI Punjab vs Rajasthan Royals IPL 2015 Match 3: Preview

“We are f***** Chennai,” sings CSK skipper MS Dhoni and his team-mates 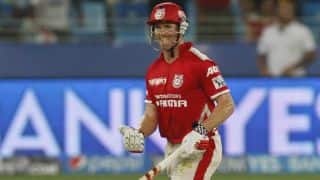