Follow the live cricket scorecard of the IPL 2015 match between MI and CSK.

Mumbai Indians (MI) will play the Chennai Super Kings (CSK) in the Indian Premier League (IPL) 2015 at the Wankhede Stadium. One would say that the CSK are the favourites for this game and should go on to beat MI, who have had quite a tough time in the IPL this year. So far, MI are yet to win a game, whereas CSK have been unbeaten in this tournament. Live Updates: Mumbai Indians vs Chennai Super Kings, IPL 2015

MI will think about making a few changes as they need their best unit out in the middle, which will give them a good chance against the CSK side. In the last game they made quite a few changes and that did not quite work well for them. Kieron Pollard and Corey Anderson bailed them out and the bowling then failed to defend a decent total. MI have to ensure they bounce back from this tough phase.  Live Scorecard: Mumbai Indians vs Chennai Super Kings, IPL 2015

MI will say though that they had a tough start last year as well but they managed to bounce back and make their way into the IPL 2014 playoffs. This time around, it may not be such an easy task for them, although they seem to have a better unit than the one that represented them in the IPL last year and the Champions League T20 (CLT20) 2014. IPL 2015: Complete Coverage 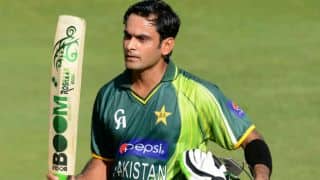 Mohammad Hafeez run out for 4 in Bangladesh vs Pakistan, 1st ODI at Dhaka

IPL 2015: Mumbai Indians vs Chennai Super Kings at Mumbai, pick of the tweets