Catch the live scorecard of the Match 13 of IPL 2015 between RCB and MI.

Royal Challengers Bangalore (RCB) and Mumbai Indians face off in the 16th match of the ongoing Indian Premier League (IPL) 2015 at the M Chinnaswamy Stadium in Bangalore on Sunday. While RCB have won one of their two games in the tournament so far, MI have lost all of their four matches so far in what has been a miserable start in the Twenty20 extravaganza.  Live Scorecard: Royal Challengers Bangalore vs Mumbai Indians

RCB pulled off an impressive victory against the Kolkata Knight Riders (KKR) in their opening game at the Eden Gardens, with Chris Gayle smashing a 56-ball 96 to guide the Bengaluru side off to a three-wicket win. They were however, flattened in their second game against Sunrisers Hyderabad (SRH), in which they collapsed to an eight-wicket defeat. Live Updates: Royal Challengers Bangalore vs Mumbai Indians

MI started off with a seven-wicket thrashing at the hands of KKR in the opening game of the IPL 8, before they lost to Kings XI Punjab (KXIP), Rajasthan Royals (RR) and Chennai Super Kings (CSK) by 18 runs, seven and six wickets respectively. IPL 2015: Complete Coverage 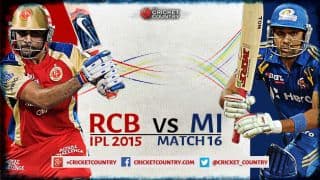