Rajasthan Royals (RR) will want to continue the momentum against Sunrisers Hyderabad (SRH) having already won three in three in IPL 2015 so far.

Rajasthan Royals have Steven Smith leading them fine, such has been their form, they have not needed the services of Shane Watson; their nominated captain. Their bowling and batting have clicked and they will hope to do an encore. They have given chance to their youngsters who have done well. Deepak Hooda has been one player who has turned the game on for them often in the tournament so far. 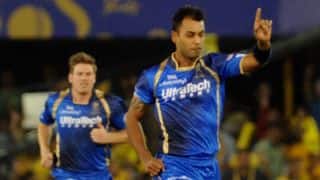 IPL 2015: Sunrisers Hyderabad vs Rajasthan Royals at Vishakhapatnam, pick of the tweets