Ireland will play for pride since Scotland have already won the series 2-0.

Ireland and Scotland will face off in a dead rubber at Bready in the fourth and final T20 International. Having already lost the two completed T20Is,  Ireland have already lost the series against a dominant Scotland but will fight to salvage pride. LIVE SCORECARD: Ireland vs Scotland, 4th T20I at Bready

The match is also important from the point of view that the ICC World T20 Qualifiers 2015 will commence next month and this is the last opportunity for both teams to get practice ahead of that. Ireland has been playing a new look side, which may have resulted in the comprehensive defeats.

Credit must be handed to Scotland however, for playing with grit and determination. Their skipper Preston Mommsen has been leading very well. Kevin O’Brien, who is inexperienced as captain, has struggled with field placement and bowling changes. Graeme Swann: Steven Smith is not a great player 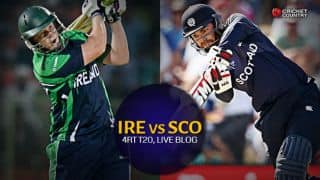