Pakistan and New Zealand face off in a two-match One-Day International (ODI) series, which are scheduled to be played on January 31 and February 3. The series will provide Pakistan an opportunity to get acclimatised to the conditions in New Zealand before the start of the ICC World Cup 2015, which the Kiwis are hosting along with Australia. Catch Full Scorecard of the match here

The series will be an ideal opportunity for Pakistan to test some of their reserve bowlers, go about some experiments, which they cannot afford to carry out once the mega-event begins on February 14. Both sides have declared their squad for the series, with Pakistan looking including Sohail Khan, the surprise inclusion in the Pakistan World Cup squad.

The two sides met previously during New Zealand’s tour of UAE, in which the teams drew the Test and the Twenty20 International (T20I) series 1-1, but New Zealand managed to win the ODI series 3-2. New Zealand lost the first Test by 248 runs, but fought back in the second Test to secure a draw. Brendon McCullum scored a double-century in the final Test to help New Zealand win the third Test by an innings and 80 runs. 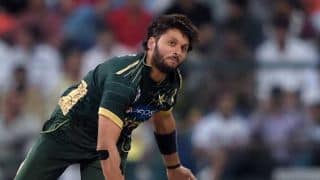