Sri Lanka face off against New Zealand on Day 1 of the first of the two-match Test series at the University Oval in Dunedin.

South-Asian giants Sri Lanka face off against Oceania giants New Zealand on Day 1 of the first of the two-match Test series at the University Oval in Dunedin on Thursday. Sri Lanka, who are coming off a loss in the last Test series against India back at home in September, would look to mend their ways and start their Test campaign afresh as they take on New Zealand in their backyard, who are indeed known to be ruthless when it comes to their home turf. However, Sri Lanka could well face an uphill task, with the series being an away encounter. New Zealand, who lost to Australia o-2 about a week ago, Down Under, too would look to win this tie and get their Test campaign on the track. Live Cricket Scorecard, New Zealand vs Sri Lanka 2015-16, 1st Test at Dunedin

Another factor is that the Kiwi bowlers were left bereft of swing in the first two games of that series which is exactly what they feed off. They will have ample swing to exploit at home and Tim Southee and Trent Boult will look the dominant force they are known to be. Sri Lankans on the other hand thrive on spin and won’t have much of that to rely on in the New Zealand conditions. Live Cricket Updates, New Zealand vs Sri Lanka 2015-16, 1st Test at Dunedin, Day 1

Things look great for New Zealand even in the batting department. Kane Williamson is a widely acknowledged world-class batsman and has mastered conditions across the globe. He’ll definitely be hoping to score big at home. Tom Latham, Brendon McCullum and Ross Taylor will also hope to score buckets of runs against the lack-luster Sri Lankan bowling attack. New Zealand vs Sri Lanka 2015-16, 1st Test at Dunedin, Preview 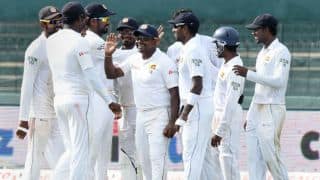