New Zealand are in control of the match and will look to have a big victory against Sri Lanka on Day 5.

McCullum declared New Zealand’s second innings at 267-3 to go with their 137-run first innings advantage. Sri Lankan openers Dimuth Karunaratne and Kusal Mendis set about building a foundation reaching 54 in the 27th over when New Zealand struck twice. Kane Williamson, who reached his half century with the second ball of the morning, was out for 71.  It was the 20th time he has passed 50 in all forms of international cricket this year including eight times in Tests. Latham offered two chances which were not taken and had a nerve-wracking wait on 99 when Sri Lanka challenged a rejected lbw appeal. Live Cricket Scorecard: New Zealand vs Sri Lanka 2015-16, 1st Test at Dunedin

In second innings for Sri Lanka, Tim Southee had Karunaratne, Sri Lanka’s top scorer in the first innings, caught behind for 29 and 10 runs later debutant Udara Jayasundera fell to Neil Wagner for 3. Mendis, in only his second Test, persevered for 150 deliveries and benefited from dropped catches on 13 and 25 before he was caught behind off Southee for 46 with the score on 109.

Even before his replacement captain Angelo Mathews could reach the crease a hail storm brought play to a halt for the third and final time. The dismissal of Mendis gave wicketkeeper BJ Watling a New Zealand record ninth catch for the Test. After New Zealand resumed the day at 171 for 1, McCullum called an end to the innings after he belted his second six to equal the world record for the number of sixes hit in Tests. Live Cricket Score, New Zealand vs Sri Lanka 2015-16, 1st Test at Dunedin, Day 5:

It took his total to 100, joining Australia’s Adam Gilchrist as the most prolific boundary busters in Test history. McCullum was 17 not out when he declared, with the 23-year-old opener Tom Latham unbeaten on 109, having notched up his third Test century. 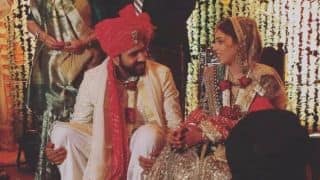