Hosts New Zealand face off against visitors Sri Lanka in he second of the five-match ODI series at the Hagley Oval in Christchurch on Monday. New Zealand, who won the opening contest at this very venue a couple of days ago in an emphatic fashion, by seven wickets, would look to repeat the same winning performance once again and win this tie in order to remain in the driver’s seat and ile more ressure on the visitors. However, it would be of no surprise if the Lankans manage to bounce back and win this tie in order to level terms in the series as they too would be in a desperate attempt to win. LIVE CRICKET SCORECARD: New Zealand vs Sri Lanka 2015-16, 2nd ODI at Christchurch

The visitors will be without the services of leading pacer Lasith Malinga in the second one-dayer as well, as he is yet to recover from an injury on his right knee. The crippled Sri Lankan attack barely had an answer to the destructive opening duo of Martin Guptill (79) and Brendon McCullum (55). In the wake of such a sloppy performance, one would expect Sri Lanka skipper Angelo Mathews and the rest of the team management to make a few changes heading into the second ODI. LIVE CRICKET UPDATES: New Zealand vs Sri Lanka 2015-16, 1st ODI at Christchurch

As far as the New Zealand camp is concerned, Kane Williamson’s chances of featuring in the second match still look bleak, which should allow Tom Latham to continue to bat at No. 3. Given how easily they ran over the tourists in the first game, it will not come as a surprise if skipper Baz opts to retain the winning combination for the second match as well. New Zealand vs Sri Lanka 2015-16, 2nd ODI at Christchurch: Preview 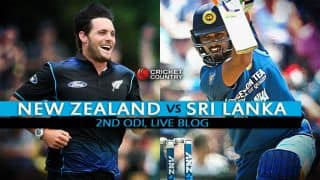