Sri Lanka will hope to end their nightmarish tour of New Zealand on a positive note in the upcoming match.

Sri Lanka hope to end their tour of New Zealand, which has been nightmarish so far, on a positive note when they face them in the second and final Twenty20 International (T20I) at the Eden Park in Auckland on Sunday. Having lost the Test and the One-Day International (ODI) series 0-2 and 2-3 respectively, Sri Lanka conceded a 0-1 lead after losing the first T20I at Mount Maunganui, losing to the Black Caps by a narrow margin of just three runs. The Angelo Mathews-led side however, will hope to redeem themselves one last time before the ICC World T20 that kicks off in March. The match will also be a crucial one for several members of the Sri Lankan side to enhance their chances of securing a berth in the squad for the World T20, especially for the young guns in the side. LIVE CRICKET SCORECARD: New Zealand vs Sri Lanka 2015-16, 2nd T20I at Auckland

Barring opener Danushka Gunathilaka and the middle-order duo of Milinda Siriwardana and Thisara Perera, there was barely any fight offered by the Sri Lankan batting order. The top-order failed miserably, with the likes of Tillakaratne Dilshan, Dinesh Chandimal, etc. falling to poor scores. The bowling too, barring the efforts of Nuwan Kulasekara, was toothless as Suranga Lakmal and Perera leaked 39 runs from three overs without taking a wicket.

New Zealand, especially their batting department, looked in great shape during the first T20I, with Martin Guptill and skipper Kane Williamson looking in great form with their half-centuries, and another fiery start from the duo should make them instant favourites for the second game as well. 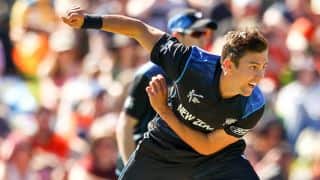 ‘Pud’ Thurlow: Left Don Bradman stranded 299 in his only Test