Sri Lanka will look to bounce back and level the series in this Test.

New Zealand take on Sri Lanka in the second Test of the two-Test series at Seddon Park, Hamilton. New Zealand already lead the series 1-0 after they won the first Test at Dunedin by 12 runs. Martin Guptill scored an excellent century, marking his return to form in the longest format. Kane Williamson became the the latest entry into the 1,000-run list in 2015 when he scored 88 and 71 in the match. Nuwan Pradeep picked up four wickets with Dushmantha Chameera and Suranga Lakmal picking two wickets apiece as New Zealand were bowled out for 431 in their first innings. In reply, New Zealand made 294 in their first innings, thereby conceding a 137-run deficit. Live Cricket Scorecard: New Zealand vs Sri Lanka 2015-16, 2nd Test at Hamilton

Dimuth Karunaratne and Dinesh Chandimal scored 84 and 83 respectively. But they could not carry on to get a big score, which cost Sri Lanka dear. The New Zealand bowlers were right on top, with Tim Southee and Neil Wagner picking up three wickets in the first innings. New Zealand then declared at 267 for 5 in their second innings with Tom Latham scoring an unbeaten 109. Rangana Herath was the pick of the bowlers, finishing with two wickets to his name. Live Cricket Updates: New Zealand vs Sri Lanka 2015-16, 2nd Test, Day 1 at Hamilton

Dinesh Chandimal was the star batsman for Sri Lanka as he scored 58 in the second innings as Sri Lanka were bowled out for 282. Sri Lanka’s tail offered some resistance but it was too little too late as New Zealand wrapped things up. New Zealand early on Thursday announced that they will go in with the same playing XI as they did in the first Test. There were speculations that they might play an extra spinner, but after a quick inspection of the wicket, they have decided against it and did not want to mess with the winnings combination. It will owever be interesting to see the changes that Sri Lanka bring to their playing XI. 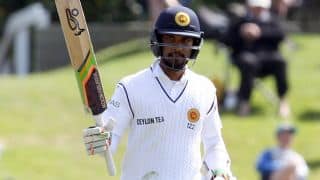