Martin Guptill has been the most prolific batsman in the series so far.

New Zealand will take on Sri Lanka in the fifth and final encounter of their One-Day International (ODI) series at Mount Maunganui. New Zealand will be upbeat about their chances of clinching the series by a 3-1 margin. Sri Lanka, on the other hand, will be hopeful to take a victory and level the series. So far the series has witnessed two one-sided games, with Kiwis winning two and the Lankans winning one. The fourth match at Saxton Oval, Nelson was washed out after nine overs of play. Sri Lanka were faced with some brutal treatment from the hosts in the first two games but have responded well thereafter. FULL CRICKET SCORECARD: New Zealand vs Sri Lanka, 5th ODI at Mount Maunganui

New Zealand will have to play without Brendon McCullum yet again as he is still recovering from the back injury he obtained while fielding in his team’s triumph in the second game. Kane Williamson —  soon to become permanent leader — will captain in the game. He will get a chance to hone his skills before he assumes the role on a permanent basis. LIVE UPDATES: New Zeland vs Sri Lanka, 5th ODI at Mount Maunganui

New Zealand’s top-order has been heavy on runs but the middle order needs to step up. Sri Lanka’s batsmen were pathetic in the first couple of games but came back roaring in the third game. They’ll want Tillakaratne Dilshan to fire again.

In the bowling department, the Kiwis will be bolstered by the arrival of Trent Boult although at the expense of the injured Tim Southee. Sri Lanka will have to show the same level of control they displayed in the third ODI and also in the limited period of play in the fourth ODI. 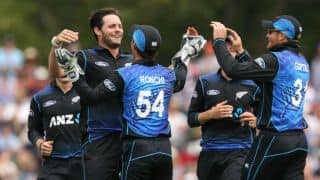