Sri Lanka will fight tooth and nail to keep the series alive.

New Zealand and Sri Lanka head off to the University Oval in Dunedin for the fifth One-Day International (ODI) on Friday. New Zealand are currently leading the seven-match series 2-1 after winning the fourth game at Nelson by four wickets, courtesy Kane Williamson scoring a brilliant century to guide the Kiwis to a victory.

It was another successful day in office for the Kiwis, as they managed to chase a challenging 277-run target with four wickets to spare a eleven balls to spare, especially when they were facing a potential collapse at a score of 63 for three. Williamson continued his brilliance with the bat, coming to the rescue of the Kiwis at the crucial stage. He hit six boundaries and a solitary hit over the ropes during his stay at the crease, and was supported by vital contributions from Grant Elliott and Corey Anderson.

The Sri Lankans need to work on their bowling, which has been shabby for most part of the tour. While the top-order need to maintain their consistency, which they did in the previous game, the Lankan middle-order is something of a worry which will need to be fixed soon. 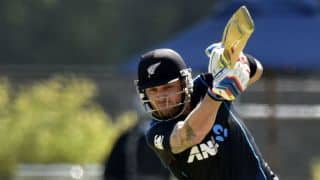