Sri Lanka will hope to salvage some pride in the final encounter of the series.

New Zealand and Sri Lanka play the seventh and final One-Day International (ODI) at the Westpac Stadium in Wellington on Thursday. New Zealand won the sixth game at the University Oval in Dunedin to take an unassailable 4-1 series lead, and will look to pile further misery on the Sri Lankans in the final game. Catch live scorecard and ball-by-ball commentary of the 7th ODI

With the game being a dead rubber, both sides might want to try a few benchwarmers and rest their key players for bigger tournaments that lie ahead of them. The hosts, for instance, might want to utilise the services of Tom Latham and Nathan McCullum, both of whom have not had many opportunities in the ongoing series. Sri Lanka might want to try out pacers such as Shaminda Eranga, who hasn’t been utilised after the first ODI.

Sri Lanka will look to retain some pride at the end of what has been nightmarish tour of New Zealand. The Lankans were whitewashed in the Test series 0-2. After losing the first ODI at Christchurch by three wickets, Sri Lanka drew level in the second game with a six-wicket win. The tourists then went on to lose four of the next five games, one of them being washed out due to rain. The last two games established the fact that New Zealand are now a truly formidable side in their own backyard. 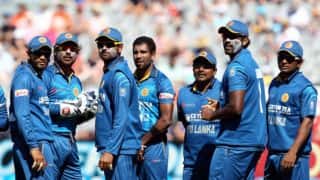