Zimbabwe hasn't won a bilateral series against a top-ranked side for a very long time now.

After winning the two-match Twenty20 International (T20I) series comfortably, Pakistan now aim to win the One-Day International (ODI) series with a win in the series decider that is scheduled to take place on Monday after Zimbabwe bounced back in the second game with a victory of five runs by Duckworth Lewis method. The visitors will want to prove that their loss in the previous game was due to bad light because many of their cricketers claimed that had Pakistan batted till the end they would have chased down Zimbabwe’s total of 276. The third game at Harare Sports Club will It will bring the curtains down on Pakistan’s short trip of Zimbabwe, following which they face England in a ‘home’ series in the United Arab Emirates (UAE). Live cricket scorecard: Zimbabwe vs Pakistan 2015, 3rd ODI at Harare

Shoaib Malik said that his side would have won their second ODI against Zimbabwe if they were allowed to play full overs. “The game was entirely in our favour as we were batting really well. It was really disappointing to end the game in that way and Pakistan just had to follow certain rules and regulations laid down by ICC,” he further added.

Malik said that it is vital to play aggressive cricket at this point of time, adding that it is quite common in game. Malik failed to score century as he remained unbeaten on 96 with the help of eight fours and a six during the match. Pakistan will now play the ODI series decider on October 5. Pakistan had earlier won the T20I series against Zimbabwe convincingly. Zimbabwe’s batting which has been their worry for a long time now, stood up in the second ODI. READ: Zimbabwe vs Pakistan 2015, Live Cricket Score: 3rd ODI at Harare 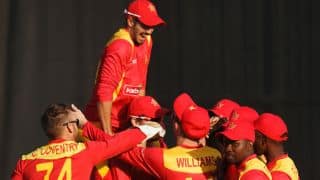