Nick Compton and James Taylor scored fifties to guide England to 179 for 4 at the end of Day 1.

South Africa and England face off on Day Two of the ongoing first Test at Durban on Sunday. England are currently batting on 179 for the loss of four wickets, with their hopes pinned on the South African-born Nick Compton who is currently batting on 63 off 179 balls. The opening day saw England win the toss and elect to bat, but crumble against a superb opening spell by Dale Steyn. At 49 for the loss of three wickets, England were reeling, until Compton and James Taylor (70 off 137 balls) came to their rescue. Steyn finally managed to snare the wicket of Taylor moments before the umpires called for stumps at the end of the day’s play, with only 65.1 overs out of the sanctioned 90 being bowled in a rain-curtailed day. Live Cricket Scorecard: South Africa vs England, 1st Test at Durban Day 2

Alex Hales was awarded his Test debut as he was picked to open the innings alongside skipper Alastair Cook. Both the openers, however, disappointed with the bat and fell victim to Steyn’s aggressive line and pace. Cook departed for an 11-ball duck, edging the delivery to Dean Elgar in the slips with England losing their first wicket with just three on board. Hales, who had struck a match-winning century in the second One-Day International (ODI) against Pakistan in the tour of UAE last month, was the next to depart, falling for just 10 runs. Joe Root, who has been the most consistent batsman for England this year after Cook, fell for 24 after getting trapped lbw off the bowling of Piedt. LIVE CRICKET UPDATES: South Africa vs England 2015-16, 1st Test at Durban, Day 2 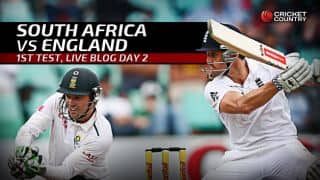