South Africa ended Day Two of the second Test at Cape Town at 141 for 2, with Hashim Amla batting on 64 and AB de Villiers unbeaten on 25. South Africa still trail England by 488 runs. The duo have put on 56 for the third wicket so far and will look to pile on some more runs when play resumes on Day Three. Openers Dean Elgar and Stiaan Van Zyl are the two batsmen dismissed so far. Van Zyl was run out for four early in the innings, but Elgar looked positive and got off to a good start but was eventually was dismissed by Ben Stokes for 44. Live Cricket Scorecard: South Africa vs England, 2nd Test at Cape Town

Earlier, England had declared after scoring 629 for 6. Stokes scored a record-breaking 258 and put on a 399-run stand with Jonathan Bairstow, who scored his maiden Test ton. Stokes scored the second fastest double century in Tests as he got there off 163 deliveries, surpassing Virender Sehwag’s feat of scoring a double hundred of 168 deliveries. Nathan Astle leads the chart wih the fastest double century, which he got in just 153 deliveries. Live Cricket Score, South Africa vs England 2015-16, 2nd Test, Day 3 at Cape Town

Stokes’ 258 was the highest score for any batsman batting at No. 6 and his partnership with Bairstow was the highest sixth wicket partnership in Tests. It was a phenomenal day for England and they will look to put South Africa under pressure on Day Three and look to enforce the follow-on as well.

On Day One, England won the toss and elected to bat first. England made just one change to their playing XI as they welcomed James Anderson back into the side in place of Chris Woakes. South Africa on the other hand got in Kagiso Rabada, Chris Morris and Quinton de Kock in place of Kyle Abbott, Dale Steyn and JP Duminy respectively. 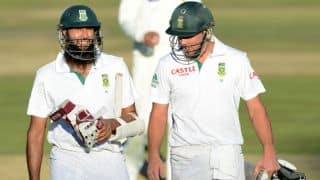