England and South Africa face-off in the fourth and final Test of the series, with South Africa looking to win their first match this calendar year.

South Africa and England resume their battle in the fourth and final Test at Centurion. England has already won the Basil D’Olivera Trophy 2015-16 by 2-0 margin with one Test remaining. England won the first Test at Durban by an emphatic 241 runs, where South African batsmen collapsed. The second Test which was a run-fest had Ben Stokes make a quick fire double century as England put up 629. In response South Africa were saved by a double century by Hashim Amla and maiden first Test ton by Temba Bavuma. The match finally ended in the draw. The third saw another second innings collapse as Stuart Broad dashed hopes of hosts revival, with the visitors winning by seven wickets. LIVE CRICKET SCORECARD: South Africa vs England 2015-16, 4th Test at Centurion

South Africa have been dealt with the same old problem in the bowling with Dale Steyn declared unfit. Good news will be that Quinton de Kock who was missed the third Test due to a freak injury is back in the squad, also included in the squad is Kyle Abbott. Stephen Cook is all set to make his debut for South Africa, as opener Stiaan van Zyl has been failing in every opportunity given. Their is also bad news for the visitors their main fast bowler Steven Finn had been ruled out of the remaining match and also can be ruled out for the ODIs. Chris Jordan or Chris Woakes can be included in the playing XI instead. 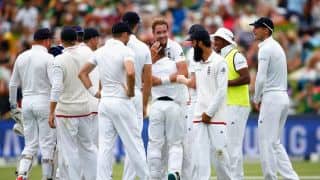