South Africa and West Indies will face-off at Centurion in the final match of the series.

South Africa and West Indies will face-off one final time in the series in the fifth One-Day International at Centurion. South Africa lead the series 3-1. They have won all matches except the previous one played at Port Elizabeth, which West Indies won by the skin of their teeth.

South Africa were reeling at 76 for four before David Miller played a memorable innings of 130 from 133 deliveries. His effort saw South Africa reach a defendable total of 262. The West Indian bowlers were phenomenal early on. ODI-debutant, Sheldon Cottrell began proceeding by taking the openers out cheaply. Jason Holder picked a four-for, two wickets of which came in the last over where he conceded just three runs.

West Indies found themselves in an even worse position early on when they came out to bat. They were reeling at 73 for five, but half-centuries from the bats of Marlon Samuels and Darren Sammy gave them small hope. But Andre Russell‘s half century changed the face of the match.

He hammered away to 64 of just 40 deliveries and was ultimately responsible to take West Indies home with just a lone wicket left in hand and nine balls to spare. West Indies will hope to better their performance at Centurion and head to the ICC World Cup 2015 on a positive note. 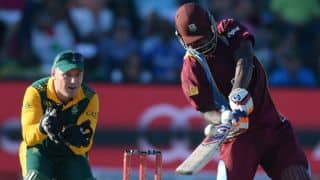