Sri Lanka ended at 272 for 8 on Day One of the third Test against Pakistan at Pallekele. Yasir Shah continued his excellent form, wherein he took seven wickets in an innings in the previous Test. This time as well he was almost unstoppable, snaring four wickets including Lahiru Thirimanne and skipper Angelo Mathews. Live Updates: Sri Lanka vs Pakistan 2015, 3rd Test at Pallekele, Day 2

Dimuth Karunaratne scored his second Test century, and made batting look very easy compared to how the other batsmen played. Jehan Mubarak, playing his first Test in seven years got a decent start but was unable to convert. Just when Sri Lanka were looking to pile on the runs, part-time bowler Azhar Ali haulted the run-flow, first getting rid of the well set Karunaratne for 130 and following it up with the wicket of Dhammika Prasad for a first-ball duck. READ: Sri Lanka predictably stutter without Kumar Sangakkara

Sri Lanka were on the verge of getting bowled out after Pakistan took the new ball when Dinesh Chandimal was dismissed for 24. He has not had the best of series and will be disappointed to get out at the latter stages of the day. Pakistan have just two more wickets to pick up when play resumes on Day Two. Yasir is just one short of yet another five-wicket haul in the series. READ: Yasir Shah’s good run gives Pakistan’s spin department much needed boost 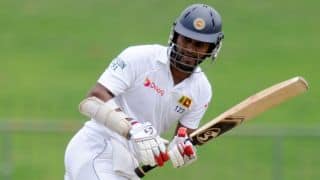