Hello and welcome to CricketCountry’s live cricket blog of the seventh  contest of the Caribbean Premier League (CPL) 2016 between Trinbago Knight Riders (TKR) and Jamaica Tallawahs (JAM) at Port of Spain. TKR have so far played 3 matches and won just one out of them which puts them below their opponents JAM, who have played one match. JAM defeated St Kitts & Nevis Patriots by just 5 runs, thus placing them at No.3 in the table. Knight Riders are defending champions of CPL will look to bring their A game tonight and get up to No.2 in the table. While the Talla’s will look to keep up their winning momentum going.

Absolute Carnage in Trinidad! Gayle might have started slowly but boy has he made his presence felt at the CPL! If McCullum took Trinbago off to a flyer Gayle made sure he made most of the pitch that was on offer. And well, spare a thought for Sunil Narine. 1-9 in his 4 overs in a high scoring game. Just brilliant!

Live Cricket Score | Jamaica Tallawahs 192/3, 18.2 overs | Batting: Chris Gayle 108(54), Rovman Powell 12(6)| Target 192 : 42 runs were needed off the last 5 overs. Beaton almost had Gayle’s wicket when he was at 94, but he had clearly overstepped and Gayle was given a lifeline. The very next ball Gayle hit a SIX! to add to the carnage. Reached his hundred and celebrated in fashion. Bravo then came back in the next over to take the wicket of Russell. But it was less than run-a-ball required then. With 10 need off 12 balls. Powell hits a FOUR and a SIX off the 19th over and seals the deal! Game Over!

Live Cricket Score | Jamaica Tallawahs 142/2, 13 overs | Batting: Chris Gayle 89(38), Andre Russell 10(8)| Target 192 : Sulieman Benn comes to bowl his first over. 3wd,6,wd,1,1,6,6,6 this is what Benn’s over read thanks to Chris Gayle. 30 runs coming from it. Kevin Cooper into his third over. Another huge over for JAM, 22 runs coming from it. Gayle smashed as many as 17 runs from it alone. Javon Seamless into the attack and gets taken to the cleaner by Chris Gayle. Gayle monsters his way to 37 via two huge sixes and 1 four in the over.

Live Cricket Score | Jamaica Tallawahs 69/2, 9.3 overs | Batting: Chris Gayle 30(24), | Target 192 : Sunil Narine brought back into the attack. OUT!! Narine gets Kumar Sangakkara for 20. Sanga misses the ball completed and gets bowled. Since the fall off the first wicket Sangakkara and Gayle has played with complete control. Gayle has looked dangerous time and again. Sangakkara on the other hand has looked calmed and composed in his stay. Dwayne Bravo comes into the attack for TKR. SIX! Gayle welcomes him with a SIX over long-on. OUT! Silly-silly run-out as Walton departs for 13. Kumar Sangakkara comes into bat at No.3.

Live Cricket Score | Jamaica Tallawahs 21/0, 5 overs | Batting: Chris Gayle 6(12), Chadwick Walton 12 (18)| Target 192 : Kevon Copper into the attack replacing Beaton. DROPPED Chris Gayle survives as Devcich drops a tough one. Narine into his second over. Another one bites the dust as Narine bowls an almost maiden over apart from the 3 wides. Beaton into his second over gets crashed by a boundary first ball. After the initial FOUR it has been a very controlled over by Beaton. Sunil Narine into the attack. Full and loopy as the batsmen misses the ball completely. This is over has been like play and miss for the Jamaican batsmen including Gayle. Ronsford Beaton to open the bowling for TKR. After a bowling a good line and length in the first 4 deliveries to Gayle, Beaton went for a yorker which misses its mark and Gayle hits it straight down the ground for a FOUR.

Live Cricket Score | Trinbago Knight Riders 191/4, 20 overs | Dwayne Bravo 10(8) : Williams into the final over of the TKR innings.OUT! first ball as Amla manages to edge the ball into the Sangakkara’s gloves. Jarvon Searles comes into the attack and starts off with a boundary down the ground. OUT! final ball of the innings as Searles departs for just 8 runs trying to get a single off the last ball. Dale Steyn into his final over will look to pick up some wickets. SIX! Amla goes big over extra cover. SIX again as Amla tearing into Steyn this time it is mid-wicket. FOUR! Bravo goes straight down the ground. Massive over for TKR 22 runs coming from it. Williams into his third over as Dwayne Bravo comes to bat in the middle. FOUR Amla will look to be the accelerator in the final overs. Super over by Williams just 6 from it. Dale Steyn comes into bowl his third over. SIX first up as Colin Munro brings up his fifty in emphatic style. DROPPED Amla survives again as Kumar Sangakkara drops a difficult catch. OUT! Steyn gets his man as Colin Munro departs for 55.

Live Cricket Score | Trinbago Knight Riders 138/1, 16 overs | Hashim Amla 50(42), Colin Munro 48(36) : Jaggesar into his third over has been miser with the runs. TKR need to turn up the volume just about now if they need to get a big score. FIFTY for Hashim Amla. Amla after being dropped has looked in total control. Powell into his final over. FOUR! Munro looking to open his arms. Good 15th over for TKR 9 coming from it. Jaggesar into his second over of this spell. He has looked good so far, keeping it tight. FOUR much needed boundary for TKR. Munro must ensure they get a good-amount of boundaries.Roman Powell comes to bowl his 3rd over. DROPPED. Imad Wasim this time, he gets his dumb wrong. Amla moves on to 37. FOUR off the final ball. Amla will want to take all the runs he can after being dropped.

Live Cricket Score | Trinbago Knight Riders 105/1, 12 overs | Hashim Amla 36(32), Colin Munro 29(23) : Joh-russ Jaggesar comes to bowl his first over. SINGLE to start.This has been a pretty tight over by Jaggesar who belongs from Trinidad. FOUR! Unlucky Munro survives again, moves on to 29. Powell into his second over. 5 runs coming from it just the over Chris Gayle would have hoped for. Williams coming into bowl his second over starts with a single towards square -leg, can he keep this up ? Williams was good till the 5th ball before he got hit for a massive SIX by Amla. Williams figures so far has been 21 for 0 in his 2overs. Roman Powell into the attack, starts off with a decent over. Only 5 runs coming from it.

Live Cricket Score | Trinbago Knight Riders 75/1, 8 overs | Hashim Amla 20(20), Colin Munro 16(10) : Kesrick Williams into the attack now replacing Wasim. DOT to start the over. FOUR! Munro gets a top edge which goes for a boundary. FOUR! This time is was lucky for Munro, thick edge for boundary. SINGLE. DROPS Walton mistimes the leap which gives Munro another life. Steyn into his second over has been all about line and length. FOUR! Amla hooks the ball to perfection. OUT! Imad Wasim strikes as he picks the dangerous looking Brendon McCullum. McCullum was seeing the ball like a hawk in his 18-ball stay in the middle. Wasim bowled a nice drifter off a ball to get McCullum bowled.  Dale Steyn comes into the attack for his first over and is a tad bit expensive giving away 8 runs from it.

Live Cricket Score | Trinbago Knight Riders 40/0, 4 overs | Brendon McCullum 34(15) , Hashim Amla 6(8) : Brendon McCullum has been on a rampage so far with the bat. McCullum has been the aggressor while Hashim Amla has been the more calmer presence in the middle. McCullum tore into Shakib Al Hasan who was taken for plenty in his second over. As many as 14 runs came from the over,which was followed by a 12 runs second over by Al Hasan. On the other end Imad Wasim has been keeping the flow of runs tight so far.

TKR in their last match beat the Barbados Tridents by 11 runs causing 171 runs to win. Knight Riders were helped by a brilliant 81 from Hashim Amla and an unbeaten 66 from Dwayne Bravo. In due course they also managed to set a new world record for a fifth-wicket stand in Twenty20 cricket of 150 coming in just 92 balls.  JAM on other hand edged past St Kitts and Nevis Patriots (STKNP) by 5 runs  in an absolute cliffhanger, as the fortune swayed from one team to the other until the last over of the match. Devon Thomas plundered three consecutive sixes and brought the crowd on its feet chasing 30 to win off the final over, only managing to miss out by 5 runs. Chris Gayle was the star with the bat for JAM, as he struck a 36-ball 51 while Thisara Perera and Tabraiz Shamsi shined with the ball for them.

Narine into his second over. Beaton into his second over gets crashed by a boundary first ball. After the initial FOUR it has been a very controlled over by Beaton. Sunil Narine into the attack. Full and loopy as the batsmen misses the ball completely. This is over has been like play and miss for the Jamaican batsmen including Gayle. Ronsford Beaton to open the bowling for TKR. After a bowling a good line and length in the first 4 deliveries to Gayle, Beaton went for a yorker which misses its mark and Gayle hits it straight down the ground for a FOUR. 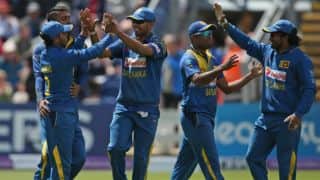