England will hope to get their winning run going against Russia in match no.4 from of Euro 2016.

Hello and Welcome to live coverage of Group B match of Euro 2016 which is being played between England and Russia. It will the first match being played at Stade Velodrome in Marseiller. England has been fairly unsuccessful in the Euro’s with their best finish coming in 1968 edition where they finished in third place. Russia on the other hand has been very poor since the fall of the Soviet Union era. Russia qualified for the 2016 Euro’s after finishing second in their Group, which was topped by Austria. England, who are indeed one of the big sides in world football, have not managed to win the most prestigious European tournament so far, and would be backing themselves to do so, following their impressive run in the qualifiers, as they managed to win all their matches, thus keeping a clean sheet in the campaign so far. ALSO READ: Euro 2016 Russia Team Preview: Schedule, squad and other details

FULL TIME, 90 mins+1 : GOALLLLLL!!!  1 – 1 : The Russian surprise comes in the form of Vasili Berezutski. Just when the England were rejoicing, the final whistle was just about to be blown, the ball is flown into the box, lands on Berezutski’s head who heads it into the net leaving English goalie Joe Hart and his teammates in shock. What a character shown by the Russians, what a comeback!

73 mins: GOAL!!! Harry Kane once again with the free kick, his Tottenham teammate collects the ball who shoots it over the wall to finally put England 1-0 up! It is his second goal for England, first came against Germany.

72 mins: Dele Alli is fouled at the edge of the box by Russia’s Georgy Schennikov. Free Kick given. Huge chance for England. Can they convert this one?

HALF-TIME: Rooney: Only 4 of 38 passes went astray, 2 chances created, & he had a stinging volley to test Akinfeev.

42 mins: No goal yet! Another chance goes in vain as the English and Russian men mix up and the Akinfeev savely punches it away. Rooney: Only 4 of 38 passes went astray, 2 chances created, & he had a stinging volley to test Akinfeev.

37 mins: Russia once again concede a corner, make way for Harry Kane again. He finally makes a good contact, the ball is immediately returned to Kane who goes for a shot but only manages to cross it to the post. Gary Cahill is next in action, dives but before he could make a contact Russian Goalie Igor Akinfeev grabs it.

33 mins: Rooney once again, he superby passes the ball to Dele Alli into the box but a Russian comes in between to stop the goal. Corner again for England, Harry Kane again with a poor kick. The ball once again flies over the heads.

28 mins: OFF SIDE! Harry Kane celebrates but the referee lifts the flag to deny England the goal. Once again it was Adam Lallana involved, his pass to Kane was gone into the net. Once again, England are clearly dominating here.

22 mins: England is on fire, they went very very close this time. Kyle Walker passes it to Adam Lallana, who shoots it to the upright of the post. Holy miss that was! Such a relief for the Russian Goalkeeper.

13 mins: Rooney’s crossfield pass from 40 yards is collected well by Harry Kane. He shoots it from 25 yards distance but misses it, the ball goes off to the right of the post. England nevertheless look good, they have created chances again and again in the last couple of minutes. A goal might happen any moment if Russian attack do not stop Rooney’s army.

7 mins: Wayne Rooney’s immediately makes his presence felt. Rooney along with Adam Lallana run through the Russian defenders only to find Akinfeev block the final touch. Corner for England, Harry Kane again with his usual duties.

4 mins: Another CHANCE! Adam Lallana passes the ball to Dele Alli, who shoots it to the edge of the box. Excellent stuffs from England, attacking has begun from the very beginning.

2 mins: Both the sides, England and Russia have made decent starts. England’s Raheem Sterling has the first shot into the box. He flies the ball over the Russian defense, but the experienced Russian goalie comes forward to head the ball off.

Nations anthems take place. Players are shaking hands. We are moments away from the kick off. Stay tuned!

Russia are placed in what some people will call the group of death along side England, Wales and Slovakia. Russia will be managed by Leonid Slutsky. Fedor Smolov, Dzyuba and Aleksamdr Golovin are the key players to watch out for in the tournament. Fedor has scored 20 goals in the Russian Premier League, is a force to recon with known for his pace. Golovin is a young midfielder who could be an apt replacement for Dzagoev. 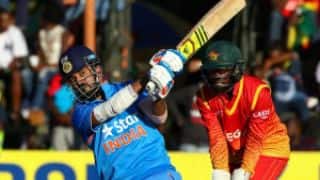 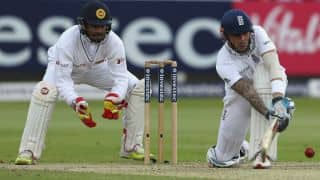