Hello and welcome to CricketCountry’s live coverage of Euro 2016’s Group A match between France and Switzerland at Stade Pierre Mauroy, Lille Metropole. I am R Narayan and I will bring you all the updates from this match. Hosts France have already qualified for the round of 16 after winning their first two fixtures. While they haven’t been anywhere near their mercurial best, they have done well to squeak through. Their opening fixture was a 2-1 win over Romania, thanks to a stunning strike late on from Dimitri Payet. Their second encounter against Albania was a close affair till the 75th minute, before substitute Antoine Griezmann opened the proceedings and Payet rounded it off late on. Live Football Score: France vs Switzerland, Group A, Euro 2016

FULL TIME: France finish the group as toppers after a 0-0 draw. The result is good enough for Switzerland as they qualify from the group at second place. As for the game, France were the better side for most parts of the game, despite Switzerland enjoying more possession. Pogba had a shot come back of the bar in the first half, and substitute Payet’s volley also rocketed of the bar.

France 0-0 Switzerland, 90’mins: Yellow card for Koscielny as he fouls Lichtsteiner. Final change from Switzerland as Mehmedi goes off and Michael Lang comes on. Free kick for France close to the area. No surprise who will take it. Payet steps up to take it. His free kick is ordinary this time, as it hits his own teammate. Only two minutes of added time! Switzerland are more than happy to pass the ball around and settle for a draw.

France 0-0 Switzerland, 80’mins: Second change for France as Matuidi replaces Griezmann. Switzerland are also making their second change, as the ineffective Shaqiri is replaced by Gelson Fernandes. Pogba lays a ball to Payet, who catches the ball perfectly, but his effort his wide.

France 0-0 Switzerland, 75’mins: Seferovic is being prepared by Switzerland. Change for the Swiss as Seferovic comes in for Embolo. Brilliant run from Sissoko, as he plays a cross in the box. Payet is the one to meet it, but his audacious volley hits the crossbar.

France 0-0 Switzerland, 70’mins: Sissoko with blasting run through the wing. But his cross his blocked off by Xhaka. Both the teams seem to have slowed down a bit. Remember, a draw is good enough for Switzerland to go through, and for France to be the group toppers.

France 0-0 Switzerland, 65’mins: Sissoko is the latest player to slip. And meantime, Payet is getting ready to come in, much to the applause of the French crowd. Here is the change, Coman is replaced by Payet. Corner for Switzerland, who continue on their impressive second half showing. Shaqiri tries to beat Lloris from the corner, but fails.

France 0-0 Switzerland, 60’mins: Embolo nearly reaches a headed back pass from Evra, but Lloris is quick to react. Griezmann with an effort on goal after a one-two with Gignac, but Sommer is up to the task again. Corner for France.

France 0-0 Switzerland, 55’mins: Another corner for Switzerland. Rodriguez to take it, but it’s a poor one from the full back. Sissoko leads a France counter-attack, and lays the ball off to Gignac. His shot though is straight at Sommer, who gathers the ball cleanly. And another funny moment, as the ball is torn from a tackle by Behrami.

France 0-0 Switzerland, 50’mins: We are back underway for the second half. Positive start from Switzerland as Embolo is played free at the right wing, but his cross is well dealt by Koscielny. Corner for the Swiss which will be taken by Shaqiri. France deal with it well.

Half time at Stade Pierre Mauroy as both teams fail to find the net. France have had the better chances, with Pogba coming close on many occasions, including an effort rebounding off the post. As for Switzerland, goalkeeper Sommer has been a rock, thwarting the French forwards multiple times. Young striker Embolo has also shown signs of promise, but nothing much. See you after the break.

France 0-0 Switzerland, 45’mins: Final five minutes of an half dominated by the home team. Griezmann nearly feeds Gignac through on goal, but Sommer comes out his area to clear the danger. Dzemaili with an effort on goal, which is well well high. One minute of added time!

France 0-0 Switzerland, 40’mins: A funny piece of incident, as Pogba climbs all over Swiss striker Embolo. And soon, he tugs back Xhaka, which leaves the Swiss midfielder needing a new shirt.

France 0-0 Switzerland, 35’mins: Shaqiri has been kept completely quiet by the French defense till now. Coman is fouled by Dzemaili and the French midfielder has a few words to say. Corner for France.

France 0-0 Switzerland, 30’mins: Another foul given for high boot, this time against Pogba. Cabaye with a brilliant challenge on Dzemaili to the thwart the Swiss midfielder’s progress. Corner for the Swiss after a good play between Dzemaili and Embolo. Shaqiri steps up to take it, but it’s an poor delivery.

France 0-0 Switzerland, 25’mins: Corner for France as they look to open the scoring. Cabaye to take it. Another corner for France, as Xhaka is frustrated with the assistant’s call. Griezmann takes it, and produces a tremendous ball, which is headed for another corner by the Swiss defense. Rami goes into the book, after a high challenge on Mehmedi.

France 0-0 Switzerland, 20’mins: Gignac is presented with a good chance after good play between Moussa Sissoko and Griezmann, but the striker fluffs his line as another chance goes begging. Another brilliant effort from Pogba, but this time the crossbar denies him. The midfielder now turns provider with a cross, but Gignac is unable to head the ball towards the goal.

France 0-0 Switzerland, 15’mins: Paul Pogba with a good effort from outside the box, which saved by Yann Sommer before the ball hits the post and goes out for a corner. Another effort from Pogba is brilliantly saved by Sommer. France upping the ante. The resulting corner nearly falls into the head of Pogba.

France 0-0 Switzerland, 10’mins: Switzerland have gotten into this game, after the hosts made a good start. Stephan Lichtsteiner with a cross in, headed away for corner. Xherdan Shaqiri takes the resulting kick, and it’s nearly the first goal for Switzerland.

France 0-0 Switzerland, 5’mins: France get underway. The much changed home side just need a point to finish as group toppers. First corner of the game falls to France after Paul Pogba’s shot is blocked. Antoine Griezmann to take the resulting kick. It’s a really good delivery, which is well defended.

France have rested their star performer Dimitri Payet, as well as striker Olivier Giroud and N’golo Kante. In come Yohan Cabaye, Moussa Sissoko and Andre Pierre Gignac for the home side.

France head into this fixture knowing a point is enough to secure them a top spot in the group. But Switzerland won’t be a tough nut to crack, considering a win for them will give them a top spot. They have four points from two matches, having beaten Albania in their first match and drawn with Romania in the second one.

The hosts have a star studded squad, filled with a mix of youth and experience. Skipper and goalkeeper Hugo Lloris, Adil Rami, Patrice Evra, Laurent Koscielny and Bacary Sagna are the elder statesmen in the side, and provide a impressive backline. In the forward positions, Anthony Martial, Antoine Griezmann, Dimitri Payet, Paul Pogba are the young blood, and give their side lots of pace.

Switzerland have a decent squad in their ranks. While they do not boast the biggest of names, they are a unit to look out for. Xherdan Shaqiri, Granit Xhaka, Ricardo Rodriguez, Stephan Lichtsteiner are more than capable players, who have lots of experience with the clubs. 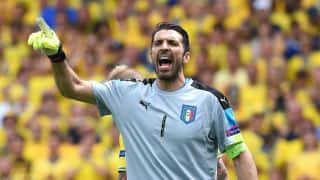 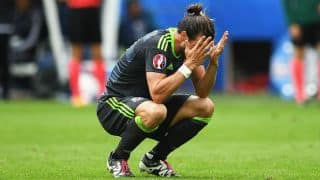